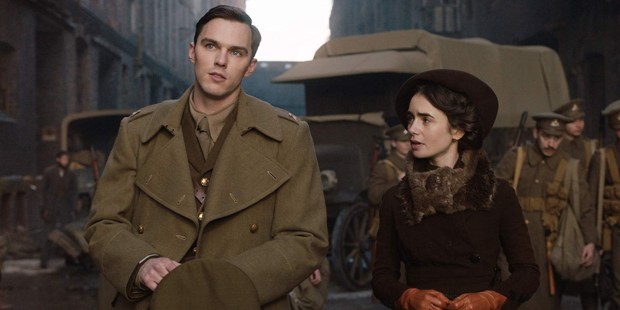 The movie is a snapshot of J.R.R. Tolkien’s early life that leaves the viewer with a desire to dig deeper into the creator of Middle Earth.

Directed by Dome Karukoski and staring Nicholas Hoult and Lily Collins, Tolkien follows the early years of Catholic author J.R.R. Tolkien and the many influences that shaped the creation of his famous fantasy novel, The Lord of the Rings.

The primary focus of the film is how Tolkien became part of a childhood group of friends who formed an informal “tea club” called the T.C.B.S. (Tea Club, Barrovian Society). They met frequently as Tolkien grew up, until the onset of World War I. The movie focuses on their unique friendship based on a love of literature, music and the arts.

Another main part of the biopic is Tolkien’s romantic relationship with Edith Bratt, the woman who would eventually become his wife. It was a relationship that was nearly severed completely when Tolkien’s legal guardian, Fr. Francis Morgan, intervened and forbade Tolkien from seeing her until he turned 21. The movie takes some liberties with the timeline of their relationship, but overall is an engaging (and chaste) love story that is played well by actors Nicholas Hoult and Lily Collins.

One of the more peculiar choices made by Karukoski was to sprinkle scenes from Tolkien’s service in World War I throughout the film. At times it can be confusing and appears to serve the purpose of breaking up the narrative to show the horrors of war. This certainly was a major influence on Tolkien’s literary works and affected him for the rest of his life, but the film puts a heavy emphasis on the war and periodically shows scenes from the frontlines about every 10 or 15 minutes.

The Catholic faith of J.R.R. Tolkien is present in the film, but plays a secondary role in his life. Fr. Francis Morgan, played expertly by actor Colm Meaney, appears only a few times. Morgan is portrayed positively, entertaining Tolkien as a child and consoling him at the loss of his friends during World War I. Yet, his ban on dating Edith provokes a heated argument that makes Tolkien hurl insults at his guardian. While likely exaggerated on film, the ban did strain Tolkien’s relationship with Fr. Morgan and is an event in his life that did happen.

The film also briefly portrays the conversion of Tolkien’s mother to Catholicism. In real life, Mabel Tolkien suffered greatly and was intensely persecuted by her own family for her decision to become Catholic. Tolkien saw his mother as a “martyr” and believed this persecution led to her untimely death at age 34. However, her “sacrifice” is never explicitly mentioned in the film and a casual viewer would be rather confused as to why Tolkien’s family had to pack up and move to the city. The life-changing event plays a silent role in the film, one that is only understood by those who are already familiar with Tolkien’s life.

Not surprisingly, Tolkien’s children and his estate released a joint statement prior to the release of the film saying, “The family and the [Tolkien] Estate wish to make clear that they did not approve of, authorize or participate in the making of this film … They do not endorse it or its content in any way.” However, at the release of the statement the family and estate had not seen the film. It was a way to distance themselves from the project and any creative embellishments that were added into the film.

Nevertheless, despite its many shortcomings, Tolkien is sure to delight the casual viewer. It is an entertaining story and gives a unique glimpse into the early life of J.R.R. Tolkien. As a film, it is a delight to watch and has many emotional scenes as well as periods of humor. Diehard fans of Tolkien will likely be disappointed, but the movie does achieve one thing that all can appreciate.

Those who watch Tolkien will want to learn more about the author.

For those who want to get a head-start and dive deeper into the life of the Catholic author, read the only authorized biography by writer Humphrey Carpenter. It is the only biography that gives an inside look into Tolkien’s life by someone who was given unrestricted access to his family and friends. Another biography that is aimed at children, but is also worth reading as an adult, is John Ronald’s Dragons: The Story of J. R. R. Tolkien by Caroline McAlister and Eliza Wheeler. It is a delight to read and offers an accurate glimpse into the life of the beloved author in an illustrated way.