Exclusive photos: The Little Sisters of the Poor celebrate 150 years in America 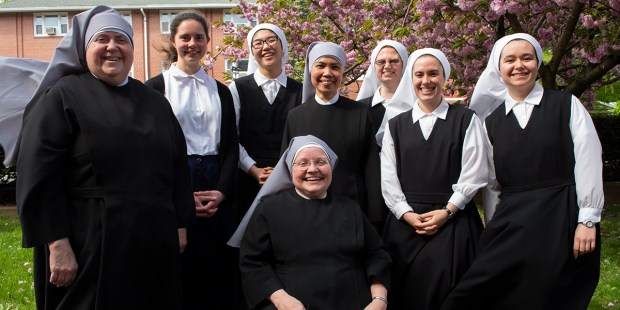 See how one humble act of faith changed the world, and what is bringing young women to join in the labor of love started by Jeanne Jugan.

Click here to launch the slideshow
On a cloudy morning on the Thames River in London in late 1864, the keel of a 365-foot long, 46-foot wide paddlewheel steam ship touched the water for the first time. As it slid down the ways to its home on the sea, the eyes and hearts of those whose strong hands had formed the iron and timber into this worthy vessel gazed proudly at the ship, a ship that would become a silent character in an incredible story that would soon unfold.

Constructed for the French shipping line Compagnie Generale Transatlantique, the freshly christened “Napoleon III” would begin its life of service by faithfully transporting people and goods between France and New York through the cold, unpredictable seas of the North Atlantic.

Our story begins on the evening on August 30, 1868, in the port city of Brest, located in Northwestern France in Brittany, when seven sisters of the Little Sisters of the Poor walked up the gangway to board the ship for New York.

As the ship sailed past the lighthouse at Pointe Saint Mathieu, trading the safety of the harbor for the embrace of the Atlantic, the missionary sisters began their journey to the New World and the challenges that would await.

The missionary Congregation of the Little Sisters of the Poor, founded by St. Jeanne Jugan only 29 years earlier, had already spread from its humble origins in St. Servan, France, to England, Belgium, Scotland and Spain, serving Christ in the elderly poor.

Through the efforts of Father Ernest Lelievre, priest auxiliary of the Congregation and “ambassador of the Little Sisters to the New World,” the sisters had been asked to start foundations in New York, Boston, Louisiana and Ohio … but New York would be the first stop.

And on July 13, 1868, Bishop John Loughlin gave the green light for the sisters to set up shop in the teaming streets of the Bushwick section of the Diocese of Brooklyn.

On the evening of September 13, 1868, the “Napoleon III” glided into New York Harbor, well before Ellis Island, the Statue of Liberty, or a single skyscraper graced the skyline. And the sisters, who had a very limited command of the English language, gazed upon the city for the first time.

They got to work immediately and a mere seven days later received their first resident, an 82-year-old man, and then two women the next day, and so on, and the Little Sisters of the Poor planted their proverbial flag on American soil and their ministry began. In four short years they grew to 13 homes, and over the next century, would grow to over 50 homes with hundreds of sisters’ homes throughout the United States.

Today the Little Sisters minister in more than 31 countries, with 234 homes and over 2,300 members.

As much as they’ve grown, the same joyfully warm spirit of compassion and hospitality is immediately felt upon entering any of the residences.

Our Mission is to offer the neediest elderly of every race and religion a Home where they will be welcomed as Christ, cared for as family and accompanied with dignity until God calls them to Himself.

Now 180 years strong and 150 years in the United States, St. Jeanne Jugan’s legacy of total reliance on Christ and heroic humility and service lives on. What began with her simple gesture of offering a bed to a poor elderly woman has now touched the lives of hundreds of thousands around the globe. A lesson that should never be forgotten: Acts done in Faith, regardless of how small, can change the world, if we cooperate with God’s Grace.

To learn more about the Little Sisters of the Poor and their work visit http://www.littlesistersofthepoor.org/