On Saturday, May 4, at noon, the doors of St. Patrick’s Cathedral were flooded by pro-lifers from around the state as they attended Mass in anticipation of what would be the largest pro-life event in the history of New York City, to be held in the center of Times Square.

The event was sponsored by Focus on the Family as a part of their “See Life Clearly” campaign, a direct response to many of the extreme abortion bills being proposed and passed throughout the nation, and particularly in New York State.

Jim Daly, president of Focus on the Family, wrote a letter to Governor Andrew Cuomo inviting him to attend and see the unborn child through the incredible 4D ultrasound technology. 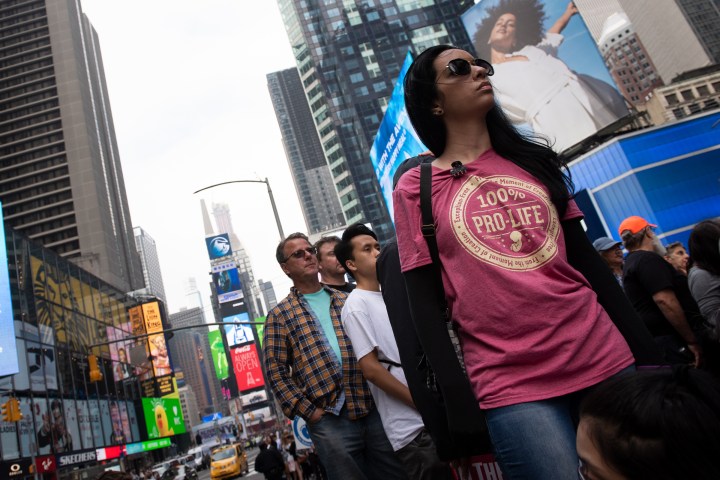 The campaign was met with resistance by owners of the digital screens that adorn the square advertising everything from soft drinks to fashion items, but Daly, undeterred, said the show would go on and in response brought their own digital screens.

As the pews emptied at St. Pat’s and the congregation spilled onto Fifth Avenue making their way to Times Square, they were joined by those of many faiths and backgrounds all in the solidarity of a mission to protect the lives of the most vulnerable.

The crowds arrived filling Times Square with the spirit of joy and hope. Cardinal Timothy Dolan was featured in a pre-recorded message encouraging perseverance in the fight for life, and speeches from Unplanned star Ashley Bratcher, March for Life President, Jeanne F. Mancini, Dr. Alveda King, NFL Star Ben Watson and others moved the crowds to an intensely prayerful state.

When the gargantuan screens showed the unborn child in his mother’s womb, the streets of the city fell silent. People raising their phones and angling to get a better view as his face, eyes and lips became clear for the world to see. A tiny life, a unique and unrepeatable life … and startled silence … which was shattered by the cheers of the thousands in attendance when the heartbeat was blasted through the speakers that lined the blocks, filling the corridors of Times Square with the sounds of life. In that sacred moment the child’s heartbeat became the heartbeat of the city.

Since its humble origins, New York City has always held the promise of a better life: A city with streets paved with gold. A city whose message as proclaimed by the poem etched in bronze at the base of the Statue of Liberty welcomes the immigrant and all those who would be considered ‘unwanted’…

With silent lips. “Give me your tired, your poor,
Your huddled masses yearning to breathe free,
The wretched refuse of your teeming shore.
Send these, the homeless, tempest-tossed to me,
I lift my lamp beside the golden door!”

If there should be any place on earth that stands for the rights of the least of these, it should be this one. With its big hopes, big dreams and big ideas. But perhaps sometimes it loses its heart, and forgets what made the city what it is today. The promise of this great city didn’t come from it’s skyscrapers; it came from its people. People who embraced that great gift of life and made something so amazing that the world took notice.

So maybe today, the sound of the heartbeat of a little child will remind us of what made this city — life. And that the hope for it is life. And if there’s one thing worth fighting for, it’s life.