Why is First Communion typically celebrated in April or May? 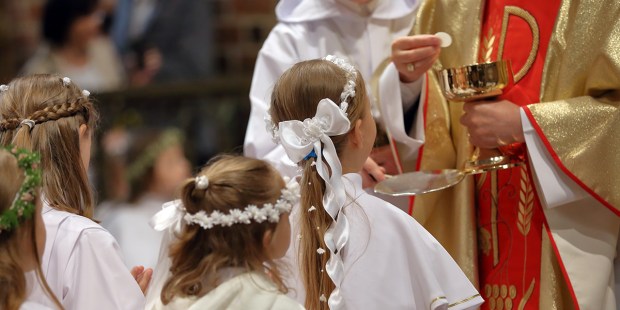 The tradition of children receiving holy communion during this time of year is a recent development in the Roman Rite.

In many Western countries, it has become an annual tradition to celebrate the First Communion of children during the months of April or May. Yet, this tradition is something relatively new and unique to the Roman Rite of the Catholic Church.

Typically this took place at the Easter Vigil, as it commonly occurs today in the Rite of Christian Initiation of Adults (RCIA). Initially the bishop conferred these sacraments, but as Christianity spread in the West, bishops were no longer able to be physically present. This resulted in a separation of these sacraments in the Roman Rite, where baptism became a solitary sacrament administered by the priest or deacon and later on confirmation would be conferred when the bishop could travel to the parish. First Communion then came after confirmation and was often given to teenagers.

By the 19th century there developed an elaborate ceremony in many Western countries where all teenagers received First Communion together at the local parish, dressed in white garments that resembled their baptismal clothing.

This was the practice up until 1910, when Pope Pius X lowered the age of First Communion and encouraged young children to receive the Eucharist at age 7 or 8. Then instead of teenagers receiving First Communion at the parish, it changed to younger children.

The decision to host this ceremony in April or May is largely based on the celebration of Easter, which in some way connects it to the original tradition of receiving the sacraments at the Easter Vigil. Additionally, for many centuries the Church instructed its members to receive holy communion annually during the Easter season. The current Code of Canon Law highlights this “Easter obligation.”

After being initiated into the Most Holy Eucharist, each of the faithful is obliged to receive holy communion at least once a year.

This precept must be fulfilled during the Easter season unless it is fulfilled for a just cause at another time during the year. (Can. 920)

Technically speaking, anyone can receive their First Communion, with the permission of their local pastor, at any time of the year. However, because of the Eucharist’s close connection to the Easter season, it is most often celebrated on one of the Sundays following Easter.