A visit to the 500-year-old remains of St. Catherine of Bologna, expert on spiritual warfare

St. Catherine led a quiet but prolific life inside a Poor Clares convent in Bologna where her mummified remains have been kept since 1463 when they were exhumed and found incorrupt.

Saint Catherine of Bologna spent most of her life as a cloistered nun in the convent of the Poor Clares of Bologna, in northern Italy. Perhaps partly thanks to such a secluded life, she proved an incredibly prolific artist, writer and philosopher, leaving behind many important pieces of work in her 49 years of life on earth. Today, her fully preserved remains dating to more than 500 hundred years ago are still preserved inside the beautiful Corpus Domini church of Bologna, also known as Chiesa della Santa (literally Church of the Saint).

Catherine was buried in a simple fashion according to the Poor Clares tradition. But 14 days after her burial her sisters decided to exhume her body, as a sweet scent emanated from her tomb. Her body was found to be astonishingly untouched by death, and deemed “incorrupt.”

Born into an aristocratic family in the city of Ferrara, northern Italy, she was educated in the arts—she particularly excelled at the viola and miniature painting—and selected to become an “official companion” to the daughter of the local Marquis of Ferrara at age 11. Princess Margaret of Ferrara grew very fond of Catherine and even asked her to stay as her official “companion” after she had been officially engaged to a local nobleman. But Catherine, then aged 14, politely declined the offer in order to become a servant of God. 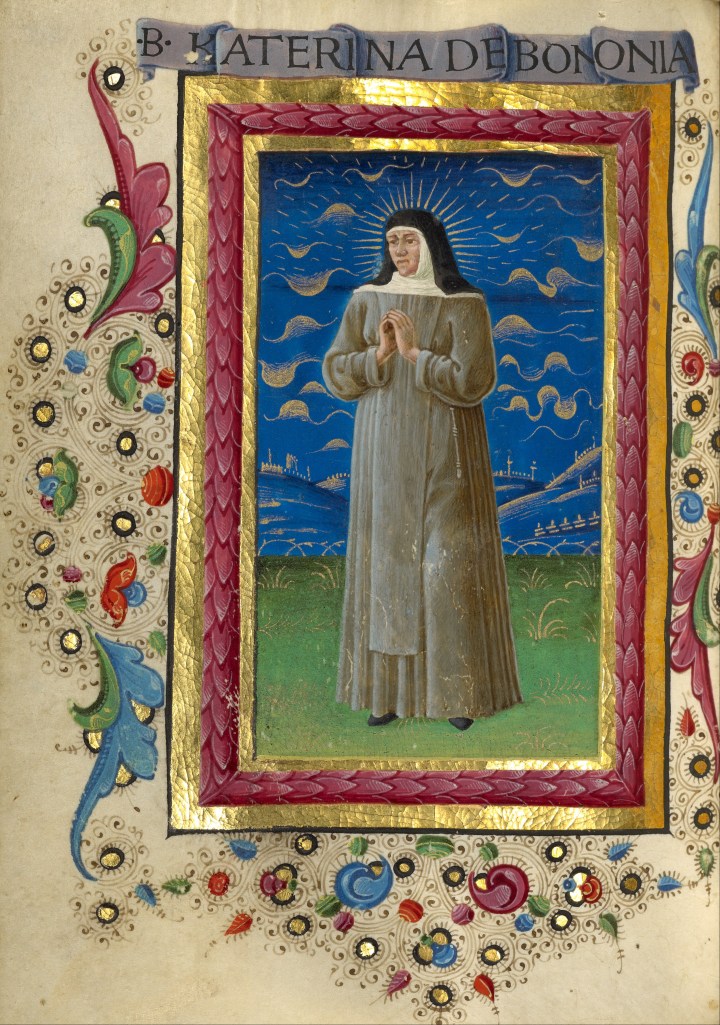 She first join a local order of lay women who followed the Franciscan rules and later become part of the “Poor Clares,” a religious order founded by St. Clare and St. Francis of Assisi to allow nuns to lead a contemplative lifestyle. As a Poor Clare she mastered the Franciscan virtues by taking care of animals and plants, engaging in a simple and communal lifestyle where laundry and cooking were shared by all members of the order.

During this time she also authored a number of religious treatises and sermons and crafted her own illuminated breviary. Her most famous work is probably the Seven Spiritual Weapons Necessary for Spiritual Warfare, written in 1438 and continuously re-drafted until her death in 1463. The manual was based on Catherine’s experience in dealing with visions of both God and Satan, and contains strategies to cope with temptation. It was later translated in French and Italian, thus helping to spread late-medieval vernacular mysticism in the early modern period.

Among her visual art production, a painting of St. Ursula, now held at Venice’s Galleria dell’Accademia, particular stands out, as well as her own illuminated manuscript which was used by Pope Pius IX and is now preserved in Oxford, England.

In 1455 the leaders of the recently established Franciscan order joined forces with the governor of Bologna to ask Catherine to establish a Franciscan convent in the city. She accepted the offer and, together with 12 nuns from her “home monastery” of Ferrara, she helped found the Corpus Domini monastery in Bologna. There, she served as an abbess until her death at age 49 in 1463, when she reportedly passed away while playing the viola.

Catherine was buried in a simple fashion according to the Poor Clares tradition. But 14 days after her burial her sisters decided to exhume her body, as a sweet scent emanated from her tomb. Her body was found to be astonishingly untouched by death, and deemed “incorrupt.” It was reported to be “fully flexible” and emanating a sweet scent. The Poor Clares of Bologna decided to place the former abbess’ body in a room inside the annexed Church of Corpus Domini, where her remains are still found today, more than 500 years later, in sitting position, holding a golden cross and a copy of the Holy Bible.

Right after her death, Catherine became the object of veneration for local Catholics in Bologna, but it wasn’t until 1712 that she was canonized by Pope Clement XI. Because of her artistic talent, she was declared patron saint of the arts. Her feast day is celebrated on March 9. As reported by Loyola Press, Pope Benedict was particularly fond of this quiet saint:

“From the distance of so many centuries she is still very modern and speaks to our lives. She, like us, suffered temptations, she suffered the temptations of disbelief, of sensuality, of a difficult spiritual struggle. She felt forsaken by God, she found herself in the darkness of faith. Yet in all these situations she was always holding the Lord’s hand, she did not leave him, she did not abandon him. And walking hand in hand with the Lord, she walked on the right path and found the way of light.”

To visit the remains of St. Catherine of Bologna, enter the church of Corpus Domini (Via Tagliapietre, 21) and look for a small wooden door on the left. Past the door lie the incredibly well-preserved remains of the Patroness of the Arts. Local nuns still run the church and will provide information leaflets with more in-depth facts about St. Catherine’s life.