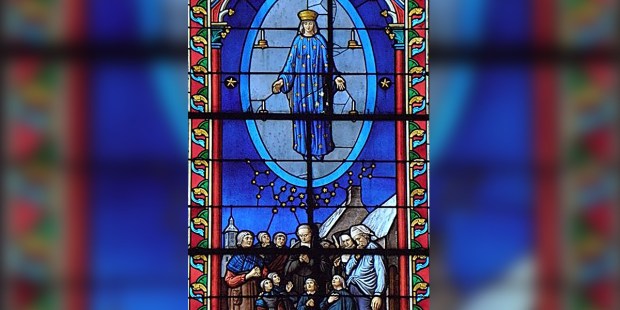 The soldiers turned back after seeing the Virgin Mary appear in the sky.

In 1870, the Kingdom of Prussia waged war against Eastern parts of France and had many victories, including the Siege of Paris in 1871. It was a brutal war, resulting in numerous casualties, and further destabilized Europe. While many different factors contributed to the end of the war, a miraculous vision of the Virgin Mary protected a French town that might have been destroyed.

On January 17, 1871, near the small village of Pontmain, France, Cesar Barbadette and his two sons, Joseph and Eugène, were finishing their chores on the farm. They looked out the window of the barn and saw a miraculous sight.

A luminous lady appeared in the sky, clothed in a dark blue robe with bright stars on it. Religious sisters from a nearby convent were called over, along with the parish priest. More villagers came over as well to witness the amazing sight.

The crowd began to pray the Rosary and soon they saw a banner unfurl beneath the Lady’s feet. It read, “But please pray, my children, God will soon hear your prayers,” and “My Son is waiting for you.”

They began to sing a song, “Mother of Hope,” and Our Lady smiled, laughed and joined in their song. The apparition lasted for about 3 hours and ended at 9:00 p.m.

At the same time, the Prussian army was advancing on the town and were a few miles away from it. The soldiers, however, were stopped in their tracks when they too saw the vision. General Von Schmidt called back his troops and they headed in the opposite direction. Schmidt said the next morning, “We cannot go farther. Yonder, in the direction of Brittany, there is an invisible ‘Madonna‘ barring the way.”

Whether or not this influenced the ultimate result of the war, the conflict ended 11 days later on January 28, 1871 when Paris surrendered. An armistice was signed on the same day.

The apparition of the Virgin Mary at Pontmain is commonly referred to as “Our Lady of Hope,” showing how the prayers of the humble do in fact have an effect and can even stop further bloodshed from happening.

Read more:
This Marian apparition in Egypt was witnessed by at least 250,000 people

Read more:
Who is Our Lady of Knock? The silent apparition