Why a former slave could say her life was good 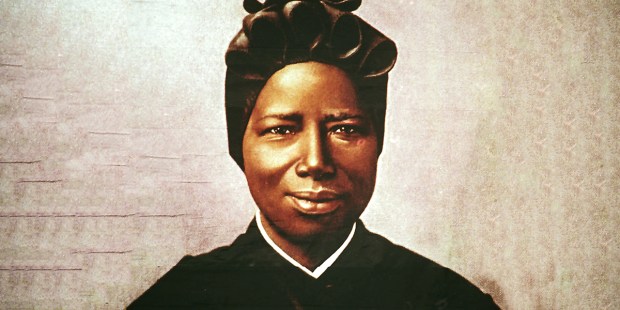 This Sunday, we understand how hope for the future changes life today.

Jesus said: “My sheep hear my voice; I know them, and they follow me. I give them eternal life, and they shall never perish.” —John 10:27-28

In his 2007 encyclical letter on hope, Spe Salvi, Pope Benedict XVI reflected, “Only when the future is certain as a positive reality does it become possible to live the present as well.”

This is how we can say that the Christian Faith really is good news: “The dark door of time, of the future, has been thrown open. The one who has hope lives differently; the one who hopes has been granted the gift of a new life.”

To illustrate his point, Pope Benedict highlighted the life and witness of a modern saint: Josephine Bakhita.

Born to the Daju people in Western Sudan around the year 1869, she was kidnapped and sold into slavery when she was between the ages of seven and nine. Eventually purchased by an Italian consul, she was taken to Italy, where she found Catholicism through her contact with the Canossian Daughters of Charity in Venice.

She rarely spoke of her years of enslavement, but her sufferings were so extreme that she was plagued by horrific nightmares for the rest of her life and the trauma caused her to forget the name she had received from her parents. (Her adopted name, Bakhita, means “Lucky.”)

In 1893, having been baptized Giuseppina, she entered the Canossian Sisters, winning the esteem of many by her piety and charity. She spent the remaining 54 years of her life serving the community and its students in a number of assignments, including cook, sacristan, and housekeeper. Known for her gentleness, especially her smile, she was commonly referred to as the “Little Brown Sister” or “Black Mother” by people in the local community.

Josephine Bakhita died after an extended illness, on February 8, 1947. Canonized in 2000, she is honored as the patron of Sudan and of enslaved peoples, as well as the victims and survivors of human trafficking.

Despite her extreme sufferings, Josephine Bakhita expressed gratitude for her experiences, because it was through them that she ultimately encountered Christ and began to have hope. This was not an enslaved person’s hope of having a kind master, but, what Pope Benedict called, the “great hope” (see Spe Salvi, nn. 3-4)

She was able to declare, “I am definitively loved and whatever happens to me—I am awaited by this Love. And so my life is good.” The hope that was born in her redeemed her and gave her the discovery of the true freedom that comes from Christ: “Come to me, all you who labor and are burdened, and I will give you rest” (Matthew 12:28).

This sense of hope that inspired St. Josephine Bakhita is at the heart of this Sunday’s Gospel, which places before us one of the greatest biblical images of God’s faithful care and mercy: the Good Shepherd.

The Evangelist John uses the image of the Good Shepherd (cf. chapter 10) to illustrate the intimate way Christ knows each of us—the flock entrusted to his care—and how, like a faithful shepherd, he constantly watches over us and lifts us up.

Eternal life is the Good Shepherd’s gift. Jesus is the source of life and because he has given his life for “his flock,” we have an abundance of life. It seems so simple, but this fundamental Christian belief is one that we can often take for granted. And that is unfortunate, because this Gospel also includes an unspoken invitation for us: We have to be attentive and receptive to this gift of life and accepting that gift means that we listen to and follow the direction of our Shepherd.

We see this in St. Josephine Bakhita’s response to her sufferings and openness to her vocation, just as we see this dynamic at work in the ministry of Barnabas and Paul who, through their preaching, came to understand that they were being called to a new mission field, seeking out new disciples who would listen to the voice of the Shepherd speaking through them (cf. the First Reading: Acts 13:45-47).

While we can (and should) take comfort in the Shepherd’s provident care and protection—and the gift of eternal life that he offers us—we can only say we truly know this Good Shepherd if we are willing to listen to his voice and follow his commands in our daily lives.

In this Fourth Week of the Easter Season, we would do well to remember the words of St. Cyril of Alexandria: “The mark of Christ’s sheep is their willingness to hear and obey … People who hear God’s voice are known by him.”

How is the Good Shepherd calling you to share in his work of caring for the “flock” of the Church?

What do you do to promote vocations to the priesthood, diaconate, and religious life?

As we continue to celebrate this Easter Season, how are you living “the resurrected life”?

Words of Wisdom: “Jesus heals through his being a shepherd who gives life. Jesus says to each one: ‘Your life is so valuable to me, that to save it I offer all of myself.’”—Pope Francis