In a handwritten note the pontiff wrote, "I have seen the ‘miracle of the sun,’ this is the pure truth.”

On October 13, 1917, thousands of individuals witnessed a miraculous vision near Fatima, Portugal. According to a local newspaper, “Before the astonished eyes of the crowd, whose aspect was biblical as they stood bare-headed, eagerly searching the sky, the sun trembled, made sudden incredible movements outside all cosmic laws—the sun ‘danced’ according to the typical expression of the people.”

This experience was confirmed by believers and non-believers alike; the event had been foretold by Our Lady of Fatima to three shepherd children. The Vatican confirmed the authenticity of the miracle and the site has become a source of numerous healings and miracles ever since.

Five months earlier, on May 13, 1917, the same day that the three shepherd children began seeing visions of Our Lady, Msgr. Eugenio Pacelli was consecrated an archbishop in the Sistine Chapel. Pacelli would later be elected to the papacy and become Pope Pius XII on March 2, 1939.

He had a deep love of the Virgin Mary and would consecrate the world to the Immaculate Heart of Mary in 1942, in honor of the 25th anniversary of the Fatima apparitions.

In 1950, Pope Pius XII was considering the proclamation of the dogma of Mary’s assumption into Heaven. While in the midst of prayer in the Vatican gardens, Pius XII saw something miraculous catch his eye.

According to Zenit, Pope Pius XII wrote a handwritten note where he says, “I have seen the ‘miracle of the sun,’ this is the pure truth.” Then he went on to further describe what he saw.

The papal note says that at 4 p.m. on Oct. 30, 1950, during his “habitual walk in the Vatican Gardens, reading and studying,” having arrived to the statue of Our Lady of Lourdes, “toward the top of the hill […] I was awestruck by a phenomenon that before now I had never seen.”“The sun, which was still quite high, looked like a pale, opaque sphere, entirely surrounded by a luminous circle,” he recounted. And one could look at the sun, “without the slightest bother. There was a very light little cloud in front of it.”The Holy Father’s note goes on to describe “the opaque sphere” that “moved outward slightly, either spinning, or moving from left to right and vice versa. But within the sphere, you could see marked movements with total clarity and without interruption.”

He saw this phenomenon on four separate occasions and was convinced that it was a favorable sign from God that he should declare the dogma of the Assumption of Mary.

Pius XII knew the events of Fatima well and conversed with one of the visionaries, Sister Lucia, who confided to him the “third secret.”

Both Pius XII’s visions and those seen at Fatima served their purpose of strengthening the faith of individuals and bringing them a ray of hope in a world shrouded in darkness.

Read more:
From Fatima to the Eucharist: The science of miracles

Read more:
Did Our Lady of Fatima predict the “End Times”?

Below, see images from Pope Francis’ visit to Fatima, where he canonized Jacinta and Francisco, two of the three shepherd children who saw Our Lady. The third, Lucia, lived to old age. 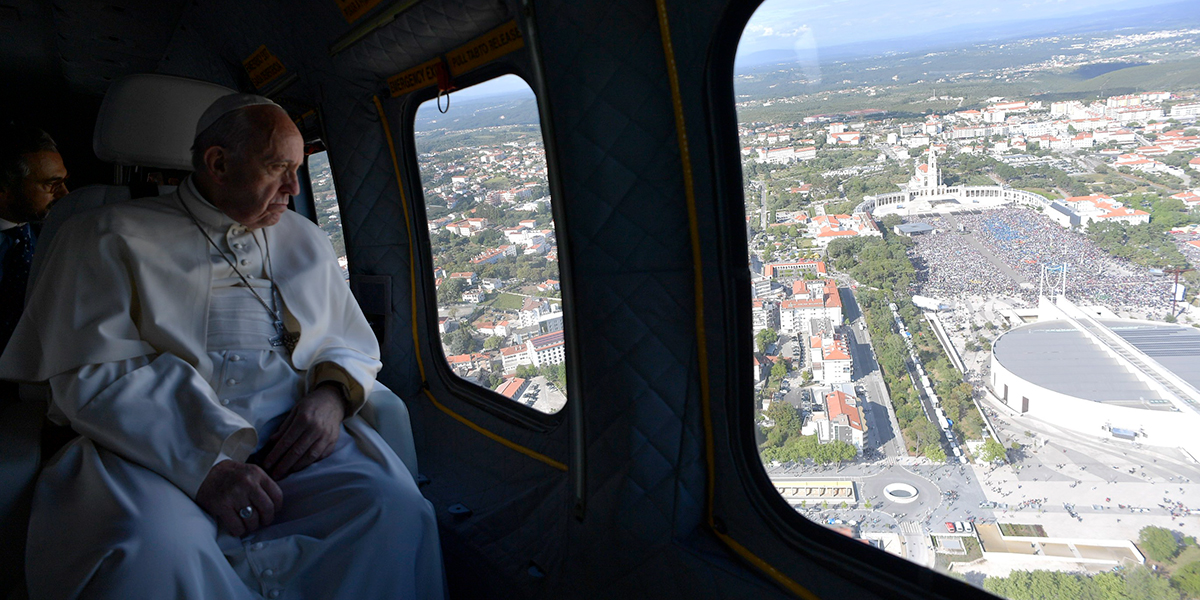