Loving God’s people with God’s love: California deacon ready to brave it all 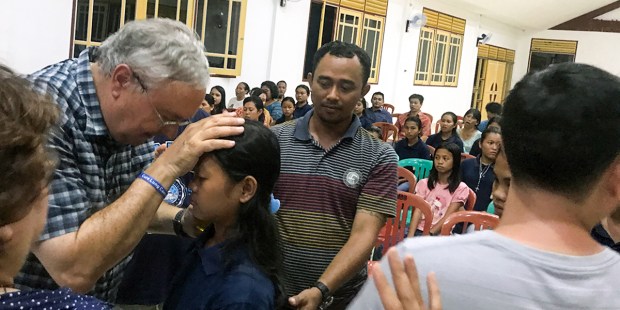 The neighborhood of Tondo, in Manila, Phillippines, is home to some 225,000 who live in dire poverty. Most dwell in temporary housing, collecting garbage for their livelihood. Some turn to prostitution, or sell their internal organs, such as kidneys, to survive. Children must work, in some cases making less than $2 per day peeling garlic.

Drug abuse and drug-related violence, crime, and human trafficking are widespread. Sickness is common; the local government estimates that 80% are afflicted with tuberculosis. Pollution is a serious problem, with the rivers black and filled with trash. The air smells foul. Those who live in Tondo have a life expectancy of just 40 to 45 years.

Deacon Steve Greco of the Diocese of Orange, California, believes that God called him to bring relief and the love of Christ to the poor of the Philippines in communities such as Tondo in a series of dreams. When a Filipino missionary group contacted Deacon Greco, telling him that after six months of prayer they believed God was calling him and his apostolate, Spirit Filled Hearts Ministry, to conduct parish missions for them, he agreed. When he first came to Tondo, he recalled, “I had never experienced such poverty and a great need for God’s love.”

He met with Fr. Rey Daguitera, pastor of Tondo’s San Pablo Apostle Catholic Church, who told him of his dream to have “a decent church where they can gather, celebrate sacraments, thank and praise God.”

A new parish had been under construction there for 20 years, but a lack of funds prevented its completion. So, in the latest of his missionary efforts, Deacon Greco returned home and initiated a Hearts for Tondo fundraiser to finish the parish and aid the community with other temporal needs. He recruited conductor Nové Deypalan, and is planning an evening of sacred and classical music next year at the Cathedral of Our Lady of the Angels in Los Angeles as a fundraiser to help Tondo’s poor.

Deacon Greco grew up in Southern California, and worked as an executive in the health care industry before retiring in 2016. He was ordained a deacon in 2007.

He remarked, “The most important aspect of my spiritual journey is learning, at a deeper level, how much God loves me. I’ve been given the grace, through Holy Orders, to love God’s people with His love. I have also learned how much God loves the poor. I have been called to serve the poorest of the poor.”

As part of his diaconate work, he launched Spirit Filled Hearts Ministry in 2014.  He explained, “I was led to be an evangelist and spread God’s love and mercy throughout the world … Spirit Filled Hearts Ministry focuses on allowing the Holy Spirit to use us as ministers of His healing power. There are a countless number of souls who need to hear the Good News of Jesus Christ.”

While the ministry began with seminars, prayer meetings, and local talks, it quickly evolved to include his Empowered by the Spirit radio program offered through Relevant Radio, as well as books, videos, and CDs on spirituality, Divine Mercy conferences, young adult ministry and men’s and women’s retreats.

Read more:
How can you pray so the Holy Spirit will come?

But some of his most gratifying work has involved his efforts aiding Catholics overseas, where they face such challenges as crushing poverty and persecution for their beliefs. On a recent trip to Egypt, for example, the churches were protected by armed guards, as “freedom of religion there is not what it is in the U.S.”

He continued, “One of the priests mentioned to me that all their mail is opened and read prior to them receiving it. In some areas Muslims who had converted to Christianity had to join the underground Church for fear of being killed.”

Missionary travel overseas can be difficult, he acknowledged. He recently led a parish mission for a Catholic community in Indonesia, in which he encountered “dense jungle with limited electricity, communications and plumbing, poor roads … and a plethora of mosquitoes.”

The Indonesians he encountered, however, “had a great hunger for Jesus [and] a great desire to learn more about Jesus.” Dire poverty threatened to close a Catholic school in the community, so Spirit Filled Hearts contributed funding to keep the school open an additional year.

Traveling overseas has also brought significant health costs to Deacon Greco and his fellow missionaries. Three of the five who traveled to Indonesia contracted dengue fever, with two being hospitalized and requiring blood transfusions. As a result of health problems that the deacon developed while in the Philippines, he had to have major surgery on his intestines.

While the challenges have been many, to Deacon Greco it has been more than worth it: “Each of us is called by Jesus to make a difference,” he says. “Say ‘yes’ to Jesus and you will never regret it!”