This trail in the Holy Land covers at least 3,000 years of biblical history (Video) 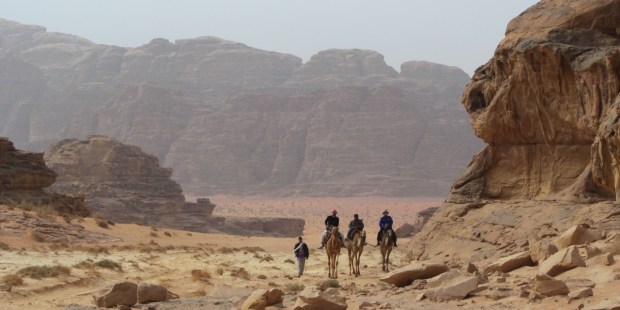 Tradition claims Moses walked all across Jordan, from the Red Sea in the south all the way to the north to Mount Nebo on his way to the Promised Land. In fact, the closest city to the ancient Nabatean city of Petra is called “Wadi Mousa,” “the Valley of Moses,” very close to what tradition has also identified as Moses’ well, the place where Moses struck water from the rock. From this very same spring the Nabateans would draw water, through a clay aqueduct that is still very much there, all the way to Petra.

This town is also, again according to tradition, the burial place of Moses’ brother, Aaron. His tomb, local guides claim, can be found nearby, atop Mount Hor.

Of course, what neither Moses nor Aaron ever dreamed of doing was going scuba diving in the Red Sea (now one of the main reasons why tourists go in flocks to the southern city of Aqaba), nor riding on a jeep across the magnificent Wadi Rum during sunset. But contemplating the stars (and the Milky Way) while drinking tea in the desert in the middle of the night certainly makes one think of the promise God made to Abraham: “I will multiply your descendants beyond number, like the stars in the sky and the sand on the seashore.”

Read more:
The surprising spiritual connection between a desert in Jordan and Star Wars

In fact, this path Moses and Aaron walked is one pilgrims, hikers, and adventurers alike can also travel today. The path goes by the birthplace of Prophet Elijah, where pilgrims from the three Abrahamic religions tie red ribbons to an oak tree, paying homage to the prophet who also walked this path all the way to Mount Carmel. Known as the “Jordan Trail,” it is the Holy Land-based equivalent of a Camino de Santiago. As one walks it, one finds the ruins of the biblical town of Tishbe (also known as Listib, or El-Istib as well), the remains of early Christian Byzantine basilicas, and, of course, the river Jordan and the baptismal site of Jesus Christ.

It should be evident by now that the Jordan Trail is not new at all: it has been there for far more than 20 centuries, surrounded by tall cliffs where one can still see the caves hermits used to live in, olive trees, creeks, and Nabatean, Moabite, Edomite, Roman, Greek, and Neolithic ruins alike. Although officially “launched” in April 2017 by the Jordan Board of Tourism, the trail follows ancient biblical, almost legendary routes, as well as the route Roman conquerors would use to go all the way from the fertile north of Jordan – Amman was then called “Philadelphia,” and was one of the ten cities of Hadrian’s Decapolis – to the south, through the impressive Roman city of Jerash, to the rich harbor city of Aqaba.

For those who don’t shy away from combining pilgrimage, adventure, and even a healthy dose of extreme sports, the trail covers 400 miles. On foot (although mules, jeeps, camels, and other means of transportation might be available in different parts of the trail), the ideal full route takes at least 40 days. The Jordan Trail goes through 52 villages, four different kinds of landscapes (from red sand cold deserts to fertile green valleys with thermal waters), and several different ancient pilgrimage and trade routes.

Of course, there’s a six-day route anyone can walk (in fact, this is the most popular one), which covers the ancient Nabatean city of Petra, through some of the Jordanian sandstone ridges. As one walks through it, Roman, Nabatean, Byzantine and Ummayad buildings, traditions and stories are found living alongside each other, in a journey through both the Old and the New Testament in a single route.