Before the terrorist attack, Sri Lankan Catholics were remembered for their beautiful religious art

Five hundred years ago, the Christian converts of Sri Lanka earned considerable respect from the Portuguese missionaries. This was partly due to their enthusiasm for the new faith, but mostly because of their creative skills.

The recent bombings in Sri Lanka were a surprise as well as a horrifying shock. Many Catholics around the world did not expect there to be a Catholic community on the Island of Serendipity, and they couldn’t understand why its members would be a target for terrorists. When Sri Lanka (Serendib as it used to be, then Ceylon) gave its name to the English word “serendipity,” it was indeed a land of unexpected delights. In more recent years it has seen more strife than a smallish island should expect.

Like so much of Asia, the story of Sri Lanka could have been very different. It still has Christian communities, but these are relics of what might have been. In lands from India to Japan, Catholic missionaries were winning countless souls five centuries ago. Unlike South America and much of Africa, it was a short-lived experience. Nowadays there are only pockets of Catholicism in South and Southeast Asia. The Philippines is the sole Catholic-majority nation left, and some fear that majority is being slowly eroded as much by Evangelical Christianity as by Islam.

Five hundred years ago, the Christian converts of Sri Lanka earned considerable respect from their Portuguese missionaries. This was partly due to their enthusiasm for the new faith, but mostly because of their creative skills. European kings and clergy had long had a taste for ivory, especially for religious carvings. As elephants were scarce in Europe – apart from Hannibal’s army and one sent as a gift from the Caliph Harun al-Rashid to Charlemagne, the Holy Roman Emperor – it was mainly walruses that paid the price.

When the Portuguese forced a toehold in Africa, it was elephant ivory that satisfied demand. By the early 16th century, when they became established in Sri Lanka, the Portuguese were astonished by the island’s profusion of precious materials. The elephant tusks may have been smaller than their African cousins’, but the quality was impressive and the local craftsmanship far superior. 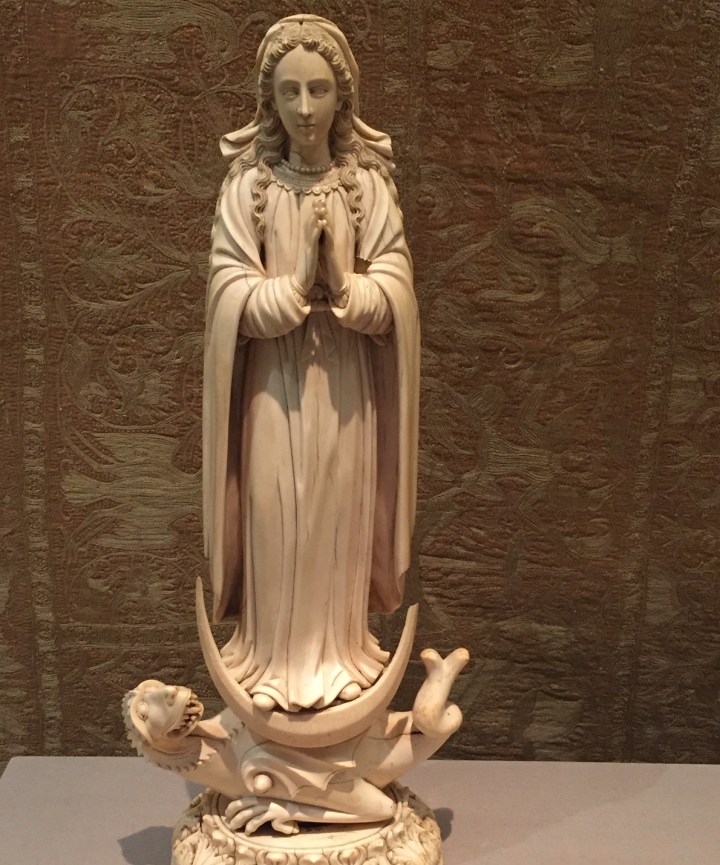 It wasn’t often that European colonizers expended kind words on the subject of local talent. They were certainly won over by the Ceylonese. In 1583 the secretary to the Viceroy of Goa was sufficiently impressed to write: “The archbishop was presented with a crucifix made of ivory by an inhabitant of the island of Ceylon, that was so artistic and masterful that the hair, beard and face seemed as natural as a living person, and so finely made, with limbs so well proportioned that one would not see its equal in Europe.”

Sri Lankan crucifixes are still considered some of the most elegant ever created. Five hundred years ago they were venerated on altars as well as in royal treasuries. Many of the religious items carved by the Ceylonese were kept among the Catholics of the island. This was a time of missionaries with a strong sense of the visual. Jesuits in particular were keen to show their new converts how Christian belief looked – and it wasn’t always that different from what Buddhists and Hindus were used to.

Admittedly, the sight of the crucified Savior required a leap of faith, but images of the Virgin Mary and scenes from the lives of the saints and the Bible were quite comprehensible. Mary generally has long hair and earlobes in keeping with local tradition. Adding to the drama of the Crucifixion, the Ceylonese enjoyed a Calvary setting. This could be a mound of rocks, carved from wood, or sometimes it might acquire the look of the Jesuit base in Rome, the Church of the Gesù. Another favorite item of cultural crossover was the Good Shepherd. A young Jesus, looking serene, surrounded by nature, worked well for communities used to Buddha and Krishna. The tree of life was frequently worked into the picture, too.

In theory, the models for local artworks in Sri Lanka, Goa and the rest of Asia were prints brought over by priests to inspire their new congregations. Michelangelo and Rubens were among the Western artists whose work was introduced to the Catholics of Sri Lanka. It’s easier to spot the influences in their carvings than to work out what sort of impression this kind of Baroque fiesta would have formed on the new converts.

The period of Catholic artistry in Sri Lanka can be dated with some precision. The Portuguese were there from 1540 to about 1650. After them came the Dutch Protestants, which meant a new artistic direction. It was out with crucifixions, saints and images of the Virgin Mary. A new non-religious functionalism prevailed, with the occasional Adam and Eve permitted.

For a brief time, Sri Lanka had been a conspicuous part of the Universal Church. Then it sank into the obscurity that exists now. Its religious carvings are widely considered to be among the best ever created in Asia, but have rarely been exhibited as a group. When the Asian Civilizations Museum in Singapore staged “Christianity in Asia: Sacred Art and Visual Splendor,” this was the first exhibition about the subject. There hasn’t been anything of note since then, which makes the Christian communities of Asia seem as remote as ever from the long history of the Catholic Church. Even modern-day Pakistan was the venue for Jesuit missionaries in Mughal times, although Asia Bibi is not a descendant of those pioneer Christians of the Subcontinent. Sadly, today, Sri Lanka Catholics are known throughout the world mostly as victims of terrorists.