No let-up in vandalism against European churches 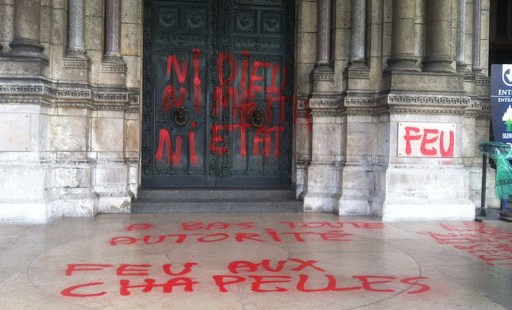 Since the beginning of May, there have been almost 20 cases of vandalism against Christian places of worship in Europe, according to a watchdog organization that documents anti-Christian activity on the continent.

Churches have been attacked recently in Germany, Scotland, England, France, Poland, Spain, Italy and Austria, according to the Vienna-based Observatory of Intolerance and Discrimination Against Christians in Europe, an independent organization founded with the help of the Council of European Bishops’ Conferences.

The incidents included the theft of consecrated hosts, arson, vandalism, graffiti with an Islamic saying and blasphemous phrases, damage to stained glass windows, destruction of religious symbols, and theft of poor box money.

The worst incident, as far as Catholics are concerned, involved the theft of the communion wafers that a priest had already consecrated as the Body of Christ. Saint-Germain church in Brion-pres-Thouet (Deux-Sèvres) was the scene of a Mass of Reparation after the Eucharist had been taken from the tabernacle May 2, according to L’Observatorire de la Christianophobie.

On May 8, just a 15-minute walk from Notre Dame de Paris, a priest at Saint-Germain-des-Près reported the theft of a bronze candlestick, a candle and a cross in gilded metal, normally placed on the altar of the church, Le Figaro reported. The May 8 incident was caught on camera, and police are looking for two individuals.

An early-morning fire broke out on May 5 in the sacristy of the church of Equihen-Plage, France, according to La Voix du Nord and other sources. The damage was estimated at around 340,000 euros. A 34-year-old man arrested on May 9 confessed to having set the fire as well as having robbed churches in La Capelle-lès-Boulogne and Wimille. He said he also had tried to set those churches on fire, but without success.

Because of the extensive damage, the church in Equihen-Plage is now closed to the public and Masses cannot be held there.

On May 8, a crucifix in the church of Saint-Martin d’Asson (Pyrénées-Atlantiques) was dismounted and the corpus was broken into two pieces, according to La Republique des Pyrenees.

“Unfortunately, this is not the first, and probably the last time, that desecration takes place in our diocese,” Bishop Aillet lamented.

The church of San Girolamo in Narni, Italy was targeted by vandals the night of May 4. According to Corriere del’Umbria, the vandals ripped out the wires of the audio system, threw sacred books on the ground, threw a large statue of Jesus onto the benches and damaged just about everything they could. The church was such a mess it was impossible to celebrate Sunday Mass the next day.

In April, terror threats were made against churches marking the Armenian genocide in Stuttgart and Frankfurt, causing the events to be canceled.

For what was described as the “umpteenth” time, the walls of the medieval Rupe quarter and the facade of its church, San Giovenale, were vandalized with graffiti which included “blasphemous phrases,” according to OrvietoSi. Police began an investigation and specialized cleaning teams will be hired to remove the paint.

While the April 15 fire at Notre Dame de Paris captured world attention, there have been many other church fires reported from various parts of France over the past few years. Ellen Fantini, who directs the Observatory on Intolerance and Discrimination Against Christians in Europe, said that church attacks in France have been relentless for the past four years, according to Nina Shea, writing in the National Catholic Register.