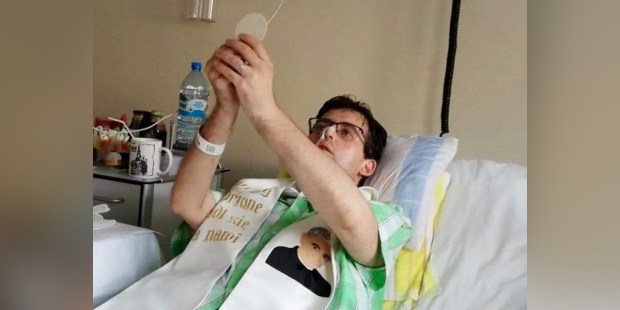 Fr. Michał Łos received a dispensation to have his ordination moved forward, given his health

“On Friday, May 24, on the hospital bed of the oncology ward in the Military Hospital in Warsaw, a very ill Michał, cleric of the Orionine Fathers, was ordained diaconate and priest through the hands of Bishop Marek Solarczyk” – writes the Sons of Divine Providence on the facebook profile of the Polish Province of the Congregation.

The day before, Father Michał Łos took his perpetual vows of chastity, obedience, poverty, and special loyalty to the Pope.

As reported by gosc.pl, Father Michał Łos comes from Dąbrowa Tarnowska, a town in the south of Poland. His illness began this year before Easter but has progressed very quickly. Due to his serious health condition of the cleric, in his last year of the Theological Seminary of the Association of the Catholic Apostolate in Ołtarzew, it was decided to speed up religious vows and ordinations.

“Michał wanted to be a priest and say Holy Mass at least once,” said the provincial priest Krzysztof Miś in conversation with the Catholic newspaper, the Gość Niedzielny.

On Sunday, his desire was fulfilled.

The Orionists have posted the video on social media, in which Fr. Łos thanks you for your prayers and gives his first priestly blessing.

Praise be Jesus Christ! Thank you all for the prayers and I still ask for them. I bless you all in the name of the Father and of the Son and of the Holy Spirit.