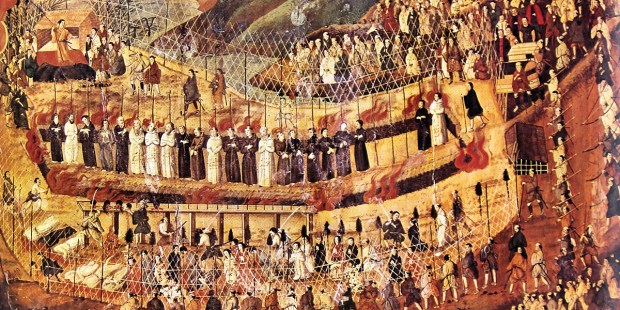 Peter Barakan takes viewers on a tour of the places where the followers of Jesus kept the faith throughout centuries of persecution.

Moviegoers in 2016 learned about a fascinating period in Japanese history from Martin Scorcese’s film adaptation of Silence, the 1966 historical novel by Shūsaku Endō. It is the story of a Jesuit missionary sent to 17th-century Japan, who endures persecution in the time of Kakure Kirishitan (“Hidden Christians”).

A new documentary takes viewers to the various places where Japanese Christians practiced their faith in hiding for about 250 years, and where some today carry on the traditions of their ancestors.

Nagasaki: The Hidden Faces of Faith was produced by Japan’s NHK television network and is narrated in English by veteran Japanese broadcaster Peter Barakan. Much of the documentary shows Barakan taking a boat to islands off the Japanese mainland, where Christians fled to be able to maintain their faith life. The region was designated in 2018 as a World Heritage site by UNESCO and dubbed the “Hidden Christian Sites in the Nagasaki Region.”

St. Francis Xavier arrived in Japan on August 15, 1549, and had much success initially in spreading the Gospel, according to the Catholic Encyclopedia. Within 50 years there were about 300,000 Christians in Japan.

Things began to change for the worse when a vessel carrying Spanish Franciscans ran aground near Tosa, and the captain strangely remarked that the missionaries had been sent to prepare for the conquest of the country. The Japanese ruler gave orders to draw up a list of Japanese Christians, and on February 5, 1597, 26 were crucified at Nagasaki. St. Paul Miki and Companions are commemorated on the liturgical calendar on February 6.

Persecution subsided for a while, but recommenced in 1614, when shogun Ieyasu Tokugawa decreed that Catholicism be abolished. The encyclopedia details:

In 1622 took place what was called the “great martyrdom,” fifty-two chosen Christians being martyred on the same day (2 Sept.) at Nagasaki, twenty-seven being decapitated, and the remainder being burned alive. In the following year, under Iemitsu, the persecution waxed still more furious and extended throughout the empire. The cruelty and refinement of the tortures are unparalleled even in the early history of the Church. The exact number of the victims is unknown. In 1637 the province of Azima, 37,000 Christians, driven to extremities, revolted, shut themselves up within the fortress of Shimbara, and were slain to the last one. In 1640 four Portuguese ambassadors who had gone from Macao to Nagasaki were called upon to apostatize, and when they refused they were put to death without further trial. Thirteen of their followers were sent back to Macao with this warning: “While the sun warms the earth let no Christian be so bold as to enter into Japan. Let this be known to all men. Though it were the King of Spain in person or the God of the Christians or Shaka himself [Buddha], whosoever will disobey this prohibition will pay for it with his head.”

A practice that was depicted in Silence was trampling on an image of Christ—a fumi-e—to prove that one was not a Christian. In the new documentary, Simon Hull, a British researcher at the Twenty-six Martyrs Museum, tells Barakan that some Christians played along with this ritual but felt so guilty that they had desecrated an image of Christ that they went home, burned their sandals and mixed the ashes with water, which they ritually drank as a form of penance.

In a Buddhist temple, Barakan discovers a small feminine statue next to a larger one of Buddha. The monk there tells him that Christians came and worshiped, but as they bowed before the smaller statue they were praying to the Blessed Virgin Mary.

Marian devotion, in fact, is a large part of what kept the hidden Christians going, and a local man leads Barakan to some of the secret hiding places his ancestors went to in order to teach the faith to their children. He recites what was at that time a secret prayer. It appears to be the Hail Mary—prayed in a mixture of Latin and Japanese. The prayer has been handed down from generation to generation since the times of persecution.

Although there were periods of relief, persecution continued until March 1873, when a regime of tolerance began. “Henceforth the Government was silent regarding religion and disturbed no one provided public order was not troubled,” the Catholic Encyclopedia says. Missionaries were allowed back in 1878. The Constitution of 1889 recognized religious liberty.

This is when the Hidden Christians began building churches, to celebrate their liberation. Many still stand, although some communities of descendants continue to worship in secret, without a church. Because of the isolation that was imposed on them, many of the hidden Christian communities have become independent of the Catholic Church and seem to want to maintain their autonomy, in spite of an appeal Pope John Paul II made on his visit to Nagasaki in 1981.

Barakan’s final stop is the Urakami Cathedral of Nagasaki, where there is another image of Mary. It is the head of a statue, one of the few things left of the cathedral after an atomic bomb destroyed the city in August 1945. In the midst of what must have been great despair at the time, the discovery of the bust seemed to say to the people of Nagasaki, “You must keep living your life,” the local priest tells Barakan.

Eyes hollowed out, the head of Mary provides a haunting testimony to the centuries of a faith that also survived.

The documentary is available online until next January.