Watch ‘The Chosen,’ the online series on the life of Jesus

For a limited time, this crowd-funded production is now available via a free app or online.

The Chosen
, an episode-based online series that tells the life of Christ through the eyes of his followers. This Easter, viewers can watch the series for free by downloading the app or watching on VidAngel’s website. A record-breaking crowdfunding campaign funded the initial launch of the series, with more than $10 million raised from 16,000 investors. According to VidAngel, over 1 billion people worldwide have watched the series. 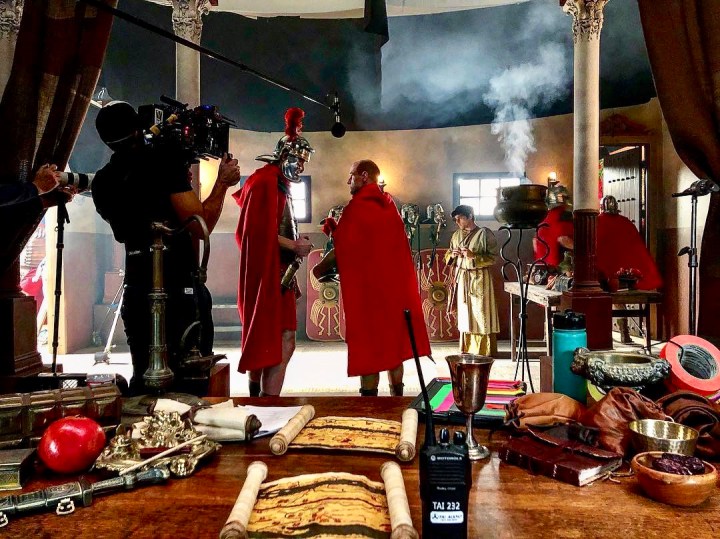 Dallas Jenkins, a self-described Bible-believing Evangelical, is director of the series, and spoke about its launch with Aleteia last year.

How has the debut of The Chosen gone?

It’s tough to debut something new with a new distribution plan into a crowded marketplace, especially with a tiny budget. This was crowdfunded, so we spend very carefully. So it’s taking some time to make sure people know about the show and know how to get it, but the response from those who’ve seen it has been overwhelming so far.  People are watching it multiple times and hosting watch parties, and the feedback has been unlike any project of which I’ve ever been a part.

Were there any particular challenges you encountered or adjustments you’ve had to make since you began the project?

How much time do you have?  Yes, the whole project has been a challenge, from starting a crowdfunding campaign from scratch, to filming a show in Texas set 2,000 years ago in the Middle East, to trying to release it completely outside the system. Nothing has been easy at any level. But seeing as how the results have been so exciting (shattering the crowdfunding record and seeing the final content of the first four episodes), we’ve learned to go along for the ride.

What do you hope the series will be? You described it as a “binge-watchable show where you can really invest in the characters.”

Yeah, that sounds about right.  We believe if you see Jesus through the eyes of those who actually met Him, you can be impacted and changed in the same way.  And, the best way to do that would be in the format of a multi-season show, where we can really take the time to get to know and identify with the characters, and dig deeper into these great Gospel stories.

Tell me about your filming locations, and the process of selecting and working with the cast.

We’re shooting the first season in Texas, a mix of sound stages and a studio in the middle of nowhere that’s a recreation of 1st-century Capernaum. In terms of cast, we’ve focused on finding the best possible actor for each role. We’re not looking for celebrities, and we’re also making sure we’re as authentic as possible to the location and time period, so the only Caucasians are the Roman soldiers.

How do you ensure authenticity to the Scriptures?

My writing partners and I start with the Scriptures as our foundation, and we consult with Messianic Rabbi Jason Sobel, Catholic priest Father David Guffey and Evangelical NT professor Dr. Doug Huffman.  We don’t necessarily agree on everything theologically, of course, but we all believe in Scripture as the Word of God.  We attempt to consider all the biblical, historical and cultural context as we develop the stories and make sure that the backstories we add are plausible and faithful to the intention of Scripture.

What will your next round of episodes be about, and when do you expect to release them?

The first half of season one is out now, and the second half releases by Thanksgiving of this year. The first season consists of Jesus gathering His followers, but the cool thing is we see people like Nicodemus, Matthew and Simon before they encounter Christ, so the miracles and callings are even more impactful. We’ve got a few big moments coming up in the second half, and I’m really excited about them.

You describe yourself as a “Bible-believing Evangelical.” Tell me about your background and religious upbringing, and what motivates you to do projects such as The Chosen.

I was raised in an Evangelical home, one of my majors in college was Bible and I’ve pretty much been a traditional believer most of my life. After Joni Earacksen Tada watched our show, she said “Thank you for telling the old, old story in an impossibly fresh way.” That was my motivation for doing the show; I want to bring fresh life to these stories we’ve heard so many times without actually changing the stories.

How did your partnership with VidAngel develop?

They saw the short film about the birth of Christ I made for my church and loved my idea of a multi-season show. They had the idea of raising the money through crowdfunding, which I thought was ridiculous, but I had nothing to lose, and I thought these guys were some of the smartest I’ve come across. So, we agreed to jump into the deep end together.