"Daks" will drop parachutists over northern France, recalling the day that turned the tide in World War II

That strange airplane sound you heard going overhead? It’s the sound of history.

If you live along a corridor between Oxford and East Hartford, Connecticut, and up through New England and you happened to be outside earlier this month, you might have seen a formation of old prop planes flying northeast. You would have had a small taste of what it might have been like in England and France 75 years ago. 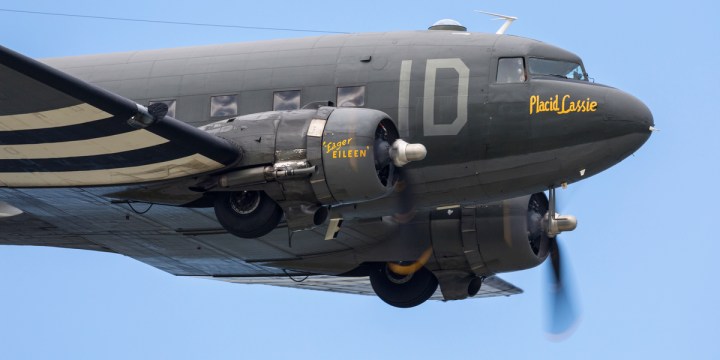 The planes are part of Daks Over Normandy, a campaign to reenact the aerial part of the D-Day invasion of June 6, 1944. The flotilla of vintage aircraft are helping to commemorate the 75th anniversary of the campaign to turn the tide against the Nazi juggernaut in the Second World War.

More than 160,000 Allied troops landed along a 50-mile stretch of heavily-fortified French coastline on D-Day to fight Nazi Germany on the beaches of Normandy. More than 5,000 ships and 13,000 aircraft supported the invasion, and by day’s end, the Allies gained a foot-hold in Continental Europe. More than 9,000 Allied soldiers were killed or wounded.

President Donald J. Trump will join French President Emmanuel Macron and British Prime Minister Theresa May in ceremonies marking the anniversary of Operation Overlord, the largest seaborne invasion in history and the soldiers who gave their lives.

A few of the veterans who participated in the invasion will be on hand for ceremonies marking the anniversary, but numbers of these nonagenarians are surely dwindling.

Almost as monumental as mounting the original invasion was bringing together the aircraft for “Daks Over Normandy.” The name refer to “Dakota,” one of the nicknames given to the C-47, the predominant aircraft that took part in D-Day. Dakota was an acronym comprised from the letters DACoTA for Douglas Aircraft Company Transport Aircraft.

Private owners and operators are flying about 30 Daks in from the United States, Canada, other parts of Europe, and Australia.

One of the planes has a message painted on the side in bright yellow: “That’s All, Brother.” It was originally intended for Adolf Hitler, as if to say, “This is the beginning of the end for you.”

This C-47 is thought to have been piloted by Lt. Col. John Donalson of Birmingham, Alabama, at the head of about 900 planes that made the flight across the English Channel to drop some 13,000 paratroopers. Part of the reason is that it was equipped with an early form of radar that homed in on electronic beacons set up on the French coast by a small group of paratroopers in “pathfinder” aircraft, Air Force historian Matt Scales told the Associated Press.

After flying over the Statue of Liberty on May 18, the plane embarked for Europe with other vintage aircraft along the same route through Canada, Greenland and Iceland that U.S. aircraft traveled during the war, AP said.

The Daks will be at Duxford Airfield in the United Kingdom, June 2-5, and then fly to Caen Carpiquet Airport in Normandy, to be there June 5-9. The locations were chosen because of their facilities and their infrastructure and because of their World War II heritage.

The celebration will include several parachute jumps, including one in Carentan, France, on Wednesday, June 5, where about 140 reenactors will jump from seven C-47 planes.

There will also be opportunities for visitors to the area to pay their respects at the various cemeteries where fallen soldiers lie. Normandy has more than 20 military cemeteries holding mostly Americans, Germans, French, British, Canadians and Polish. The American cemetery of Colleville-sur-Mer, near Omaha Beach, has 9,380 graves, most of them for servicemen who were killed in the landings and ensuing battles. Another 1,557 names are inscribed on the Walls of the Missing.

About a million people come every year to visit the fallen. Alain Dupain, 61, a gardener who has worked at the cemetery for 35 years, told Fox News that he and his team of 20 people “work for the families.”

“When they come, we want the site to be perfect for them and their tombs,” Dupain said. “And I think if one of your loved ones dies and you arrive at a beautiful, well-maintained place like that, it will not erase the pain but might bring a little bit of relief.”

Superintendent Scott Desjardins of the American Battle Monuments Commission added that the top priority “is to keep this site at the highest standards possible because it is the promise we made to the families who decided to keep their loved ones with us. It overrides every other priority.”

The memorial of Colleville-sur-Mer aims to preserve soldiers’ stories, Desjardins added. “So we’ll continue to say their names. And continue to tell people what it is that they did.”

On Sunday, June 16, there will be a Solemn Mass in Sainte-Mère-Église. About 15,000 paratroopers landed in and around Sainte-Mère-Église in the middle of the night on June 6. It was the first village liberated by the Allies.