A Cubist’s take on the crucifixion 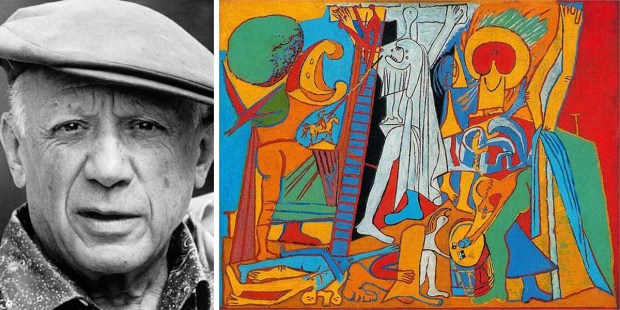 Nearly a decade before his masterpiece “Guernica,” Pablo Picasso choose to represent the horror of the crucifixion with an equally powerful pictorial style.

Pablo Picasso is considered one of the most innovative geniuses of the 20th century. From his proto-Cubist painting “Les Demoiselles d’Avignon,” that introduced Picasso’s utterly personal pictorial style centered on emotions rather than accurate depiction of reality, to his epic representation of the horrors of the Spanish Civil War in his 1937 masterpiece “Guernica,” the Spanish master has created images that have forever changed Western art. But not many people know that among the vast array of subjects selected by inventor of Cubism, from dancers to bullfighters, there were some religious ones.

Indeed, among the works considered as landmarks for Picasso’s evolution of Surrealism style lies the religious-themed “Crucifixion.” Picasso completed many preparatory drawings for this painting during the end of the 1920s and completed its final version in 1930. Many critics consider the emotional representation of suffering shown in this painting as an anticipation of “Guernica” in 1937.

All of the standard subjects of Crucifixion are featured in this 20- by 26-inch oil on plywood composition, but it’s not easy to decipher the jigsaw assembled by the Cubist master. Jesus appears in all of his Guernica-like suffering at the center of the picture, surrounded by nearly indistinguishable figures made of bright colors and dramatic brushstrokes. The two larger figures represent the Virgin Mary and Mary Magdalene, while the smaller disjointed bodies belong to the thieves crucified with Jesus. The much smaller human-shaped silhouettes, one positioned on the ladder and one on the left of the Cross, represent a man nailing Christ’s hands on the cross and the centurion poking Christ’s body with his lance.

The sharp contrast between Picasso’s famous shades of blue and bright oranges, yellows and gold stand as a pictorial testament of the strong emotions evoked in the artist when considering the suffering of Christ. By painting Christ in a different color than his surroundings, Picasso wanted to stress the presence of “life in death” and the miracle of transformation through suffering. The father of Cubism was known for creating disjointed subjects based more on his own perception than actual reality, but in this case some of the subjects such as the Virgin and Mary Magdalene seem to have been disjointed by their own agony.

Some 89  years after its creation, “Crucifixion” still stands as a powerful visual account of the inhumane suffering borne by Jesus during the crucifixion. Perhaps because of his emotional involvement in the piece, Picasso never sold this painting to private collectors. It has been featured in the most important exhibitions dedicated to the Spanish artists including “Picasso: Fifty Years of His Art” at the New York Museum of Modern Art in 1946. The painting is now part of the permanent collection of the Musée Picasso in Paris, France.