The story behind Flannery O’Connor’s stories 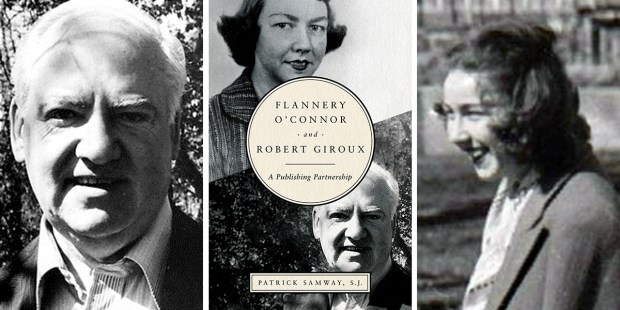 The partnership between one of the greatest Catholic writers of the 20th century and her New York editor was — like O’Connor’s writing– infused with grace.

Flannery O’Connor and Robert Giroux: A Publishing Partnership
By Patrick Samway, SJ
320 pages, Published by the University of Notre Dame
$39.00

When reading the works of a literary giant like Flannery O’Connor, it’s easy for readers to look up at the author in stupefied awe. The words and ideas are strung across the page like perfectly formed constellations, and the writer—a poised, rapt, independent genius—disappears into their brilliance. We become Salieri in Amadeus, astounded by this mere mortal who seems to effortlessly channel divine beauty into the world.

But Patrick Samway, SJ’s new book about a writer and her long-time editor—Flannery O’Connor and Robert Giroux: A Publishing Partnership—reveals a different, more human story.

This “book about books” dives into the literary world of O’Connor’s life and times, and for that reason will be an easy sell for any fan of the great Catholic writers of the 20th century. Evelyn Waugh, (Anglo-Catholic) T.S. Eliot, Walker Percy, Dorothy Day, Thomas Merton, and Jacques Maritain are all minor characters who cross paths with O’Connor and sometimes each other. Wonderful tidbits about such crossings, like the following one about Waugh, almost become routine: “The celebrated author Evelyn Waugh, who edited the British edition of Merton’s The Seven Storey Mountain under the title Elected Silence and would later write a blurb for O’Connor’s Wise Blood, wrote to Giroux on July 20, 1948 …” (Samway himself was directly plugged into this world, too; he met with Giroux “hundreds of times” over 20-plus years, and also assembled Percy’s Signposts in a Strange Land, which Giroux edited.)

But we are drawn even more intimately into the circle of writers and friends who had a direct influence on the development of O’Connor’s writing: people like Caroline Gordon and Allen Tate, Robert and Sally Fitzgerald, the poet Robert Lowell—and especially Robert Giroux.

The most remarkable thing about O’Connor and Giroux’s partnership is that it almost never happened. Samway explains that before a fragile Lowell introduced Flannery to Giroux in his midtown Manhattan office on March 2, 1949 (a fascinating story in and of itself), O’Connor had been pursuing a contract with Rinehart & Company for Wise Blood; Harcourt, Brace, then home to Giroux, was a sort of back-up plan. But a representative from Rinehart wrote her a blistering letter about the book, saying (among other things): “Most of us have sensed a kind of aloneness in the book, as if you were writing out of the small world of your own experience, and as if you were consciously limiting this experience.”

Her meeting with Giroux was markedly different. He was a good editor—he knew that his ultimate role was simply to help all his authors “write their very best”—but he also immediately “had a hunch” that Flannery O’Connor was a genius. When he later read nine chapters of her first novel, he was “convinced of her potential.” But perhaps most importantly, Giroux understood the spiritual nature of her work. “Due to his Roman Catholic background and close editorial work with a variety of religious writers,” Samway notes, “Giroux perceived instinctively what O’Connor was doing.” That intuition and support proved critical—according to Robert Fitzgerald, “[Harcourt, Brace] wouldn’t have had sense enough to publish Wise Blood if it hadn’t been for Giroux.”

As her editor, Giroux offered “expert advice” to O’Connor, allowing her “complete freedom to make changes in galleys and page proofs right up to the moment of publication”; he made helpful creative recommendations of his own, even proposing a new conclusion to her short story “Good Country People”; and when he eventually left Harcourt, Brace, he continued to reach out to her as a friend, mentor, and supporter. This investment in their relationship paid off; eventually, Flannery O’Connor also left Harcourt, and decided to join back up with Giroux; and the man who edited her first two books went on to edit the final two before her death. Even as O’Connor’s health faltered during her heroic push to complete her final collection, Giroux continued to remain a kind friend as much as an editor, reassuring her at one point: “We shall publish the book when it is ready. The important thing now is to rest.”

While Samway’s book will introduce many readers to Giroux, it also introduces them to a new side of Flannery—not Flannery the literary genius, incisive essayist, or witty letter-writer, but Flannery the harried author. We’re drawn into her navigation of a world of travel, contracts, typos, blurbs, reviews, translations—and her human side is thrown into relief. At times, she displays great frankness and panache, advocating for herself as an author; at other times, she scrambles on late edits, gets irritated by book covers, and even wrestles with the overall state of her writing just before its release. But “Old Giroux” reminded her: “Prepublication letdown is a familiar symptom. I see it often and I don’t know any good writer who doesn’t have it.”

Flannery O’Connor famously referred to herself as a “hillbilly Thomist,” and A Publishing Partnership is a literary echo of a classic Thomistic insight: that grace perfects nature. O’Connor’s genius didn’t descend ready-made onto the page for generations of readers to marvel at. Instead, it was infused into the raw stuff of life, a whole series of happy coincidences, practical decisions, and personal relationships. This process—like grace itself—was marked by painful change. But the result was nothing short of literary perfection.