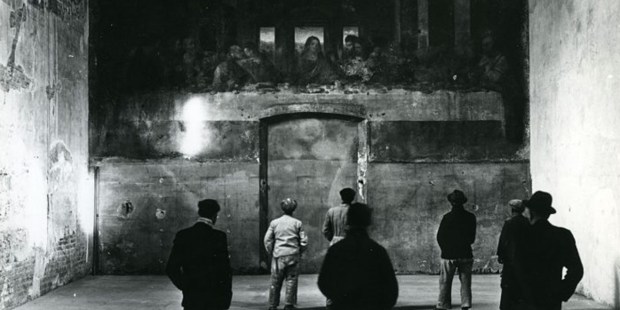 When an air strike hit Milan in 1943, most assumed that Leonardo’s masterpiece had been destroyed.

Leonardo Da Vinci’s “Last Supper” is probably one of the most famous works of art in the world. But during World War II the great masterpiece of Christian art was nearly lost to an air strike.

Completed in 1495, the mural painting depicting Jesus as he informs the 12 apostles that one of them will betray him (John, 13:21) had survived for nearly five centuries inside Milan’s Santa Maria delle Grazie Church. In 1943, Allied forces launched a bomb strike over Milan, damaging many of the city’s Catholic landmarks, such as the Duomo (Cathedral), the historic Santa Maria del Carmine church and Santa Maria delle Grazie itself. The latter target was almost completely wiped out — the cloister had collapsed and most walls and a large part of the roof had been crushed.

As Mental Floss reports, the situation was so bad that Deane Keller, a Yale professor who led the “Monuments Men” (a team of American soldiers whose mission was to protect artworks from the Nazis), wrote several letters expressing his concern for the painting that he assumed to “be in ruins.”

But much to their own surprise, when workers removed the rubble from the Da Vinci’s mural a few months after the bombing, they found it almost intact. As noted in articles from the time, all it would have taken was for the roof to have collapsed closer to the wall and the masterpiece would have been gone forever. Indeed, Father Acerbi, who served at Santa Maria delle Grazie, initially thought that the painting had been saved thanks to a miracle. Sure, Leonardo’s work was protected by scaffolding and sand bags that had been placed there as protection by a group of architects and city councilors as part of a plan to protect Milan’s artworks when war broke in 1940. But how exactly “The Last Supper” survived such heavy bombing remains an unsolved mystery — which for some stands as evidence of divine intervention.

Fortunately, the painting has since been restored. Restoration work that started in the 1970s and terminated in 1999 was particularly crucial to the preservation of “The Last Supper.” Thanks to the painstaking work of a team restorers, scientists and art historians that used special chemical substances to recreate the original chromatic palette, Leonardo’s original colors were finally brought back to life.

Last week, a new exhibition has been unveiled to celebrate the epic history of Da Vinci’s historic painting. Titled “Images of the Last Supper,” the exhibition offers a collections of photographs and historical documents that recount the various events that have impacted “The Last Supper” over the years, from soldiers to bombings. It was organized thanks to a partnership between the National Museum of the Cenacolo, Lombardy’s Museums Association and Cineteca Foundation, and it’s open to the public until December 8. Tickets can be bought on the spot. But If you are interested in visiting Leonardo’s’ masterpiece, it’s best to plan way ahead. In order to help its preservation, only 25 visitors can access at a single time, for visits of no more than 15 minutes. Tickets can be reserved online at this website.