Boy doing his homework under a streetlight goes viral, and a millionaire takes notice 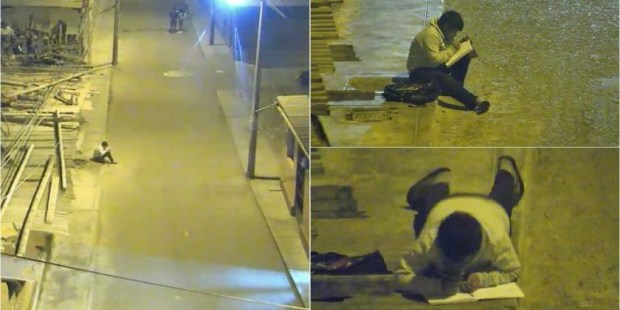 It sounds like a fairytale or maybe the plot of a Charles Dickens novel — but it’s a true story.

It began when Víctor Martín Angulo Córdova, an 11-year-old boy from Moche, Perú, caught the attention of the officers monitoring the city’s security cameras. A street camera captured video of the sixth grader sitting and lying down in the road under a streetlamp doing his homework.

Soon the images and the backstory went public on news outlets and social media. As reported on the Perfil website, Víctor’s family didn’t have electricity, but the boy was determined to get an education so he could grow up to be a police officer to “fight corruption, thieves, and drugs.”

According to Perfil, the reason the family didn’t have electricity was twofold: a lack of money to pay the bills, and more importantly, the fact that they didn’t have documentation to prove the ownership of their home, which was needed for the contract to install electricity.

The first person to come to the rescue was the mayor of the town, Arturo Fernández Bazán, who brought Víctor a package of school supplies and helped the family get the paperwork done so they could acquire the deed to their property and get electricity installed.

That in itself was a big step forward, but only the first. It was then that Yaqoob Yusuf Ahmed Mubarak entered the scene. He’s a 31-year-old millionaire importer and chocolatier from Bahrain, who during his childhood wasn’t lacking money, but affection. According to the Clarín news site, Mubarak saw some of his childhood friends die from drugs and crime in his youth and he suffered from depression.

Mubarak’s painful background gifted him with empathy and a desire to help others, so Víctor’s determination to study and be responsible in the midst of poverty moved his heart. In an interview, he says that under the same conditions, he never would have had the motivation to study. So, Mubarak traveled from his small island country (a quarter of the size of Rhode Island) in the Persian Gulf to Moche, Peru, to meet the boy in person.

Photos of the encounter show the Bahraini businessman hugging Víctor, posing with his family, and lying on the ground reading books with him, apparently imitating Victor’s position when he was caught by the security cameras studying by streetlight.

Mubarak was struck by the poverty in which the boy and his peers lived and studied. He decided to rebuild Víctor’s family’s humble dwelling as a two-story home, help Víctor’s mother start a small business, and give $2,000 to the boy (in his mother’s care). Víctor pointed out that he has many classmates who are in a similar situation, so Mubarak also pledged to remodel and expand the school Víctor attends, adding, among other things, a modern computer lab. The only thing Mubarak is asking in return: that Víctor continue to be a humble, extraordinary person who loves his mother and works hard at his education.

Reportedly, Mubarak is having some difficulty making the donation to the school, due to bureaucratic obstacles on the part of the Peruvian government. Let’s hope that the obstacles can be overcome so this fairytale can fully come true.

(Thanks to our Spanish edition for calling this story to our attention.)

Read more:
Billionaire pays off the debts off an entire college class