This holy hour brought hope to parents of fallen-away Catholics 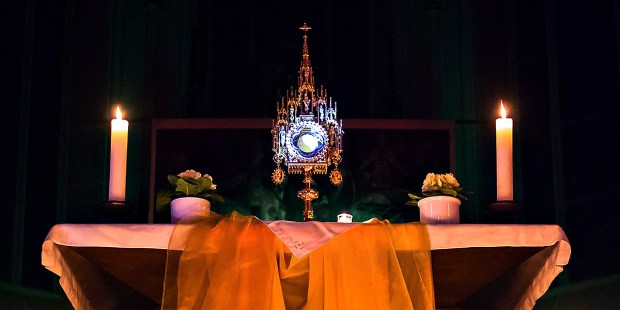 A holy hour of Eucharistic adoration recently brought hope and comfort to parents worried about their grown children’s spiritual welfare.

Mary and Paul Alciere of Hingham, Massachusetts, married 65 years and the parents of six, planned the holy hour.

“So many children who were raised Catholic don’t attend Mass now or have left the Church. They’re divorced, living with boy/girlfriends …” said Mary. “I’d been thinking for a while this needed to be done.”

The service that she and Paul designed drew more than 50 parents to St. Paul Church in Hingham, a Boston suburb, on a Saturday morning.

Interspersed with moments of silent adoration, the hour included Benediction, a capella hymns, Scripture readings, a Rosary, and a litany of saints who found holiness through their vocation as parents.

Prayers focused on the mercy and providential care of God the Father and the intercession of the Blessed Mother.

“We can’t tell our children what to do any longer, or if we do, they don’t listen,” Mary said. “But we have this going for us — we know God loves our children even more than we do.”

The Alcieres enlisted help from the pastor, Father Thomas Nestor, and lay volunteers. They provided a one-page program, along with take-home prayers.

And judging from the smiles of parents as the hour ended, the program was well received. Several suggested the Alcieres share the format, which is described briefly below.

As the program began, people were invited to write their children’s names on slips of paper. These were placed in a basket at the foot of the altar, upon which Father Nestor had exposed the Blessed Sacrament.

After the hymn “O Salutaris Hostia,” there were a few minutes of silent adoration.

Father Nestor spoke briefly. He acknowledged the parents’ heartache, which he shared: a sadness that so many Catholics no longer appreciate what a spiritual treasure their faith is.

But he reminded them also of the “great confidence that we have in what the Lord has provided for us in the sacraments.”

They next prayed a litany to saints who had been parents, entreating the help of St. Anne, St. Monica, St. Gianna Molla and 20 others.

The litany ended with a plea: “We ask you, God our Father, through the intercession of all the angels and saints, to pour out your blessings on our children.”

A lector then read Ezekiel 36:24-28, in which the prophet relates God’s promise: “I will give you a new heart and place a new spirit within you …”

There was a quiet time for personal prayer before the hymn “Come, Holy Ghost.”

The Alcieres next led a Rosary with special meditations that drew parallels between events in the lives of Jesus and Our Lady and concerns of parents today. One decade of the Rosary was prayed for each mystery.

The meditation for the first mystery, the Birth of Jesus, began: “Mother Mary, when you held the newborn baby Jesus in your arms, you were filled with love and wonder and hope for his future … (and yet later) a sword pierced your heart.

“We were once filled with love and wonder and hope when we held our babies. Now they’ve grown up and our hearts are broken because they’ve grown away from the faith we taught them. Pray for us who have recourse to you.”

The second mystery, the Presentation, expressed sorrow that grown children who were baptized into the Catholic faith have abandoned it.

The third mystery of the Transfiguration recounted how the divinity of Jesus was revealed to Peter, James, and John.

The meditation implores: “Mary, ask your Son to do for our children whatever it takes for them to recognize Him as their Lord and Savior.”

The fourth mystery, the Crucifixion, entreated Mary to pray for children to realize that Jesus died for their eternal salvation.

Finally, the Descent of the Holy Spirit begs God to fill these adult sons and daughters with His Spirit.

The song “Mary Full of Grace” followed, then readings from John 14:1-2 and Ephesians 3:20. After a quiet period all sang “I Have Loved You with an Everlasting Love.”

The holy hour concluded with Benediction. A volunteer lifted the basket of children’s names in prayer as Father Nestor raised the golden monstrance in blessing.

Closing songs “Holy God, We Praise Thy Name” and “Amazing Grace” were sung with fervor.

One mother said later, “The quiet and reverence of the holy hour touched me. We truly recognized the need of praying from our hearts.”

“Thankfully we have Christ’s Presence in the Eucharist,” said another. “Having it be an hour of adoration drew us all closer to God.”

Read more:
Pope: Even if you resent your dad, you can still have the experience of the Father’s love