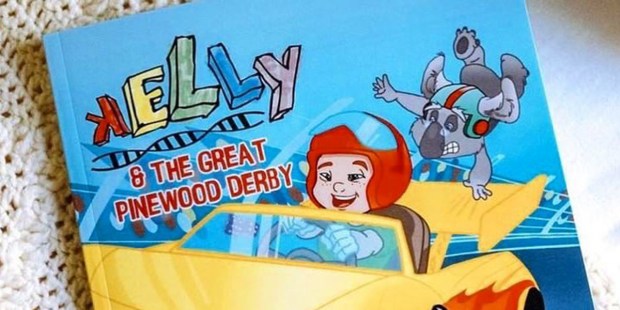 There’s a great family story behind ‘Kelly and the Great Pinewood Derby,’ as well as a message for today’s culture.

My family has always known people with Down syndrome, so they’re not unfamiliar to us, but with too few of these precious people allowed to be born today, many people are not familiar with them. Jordan Burk, the author of a new children’s book called Kelly and the Great Pinewood Derby, wants to help change that.
Burk’s main character is based on his favorite uncle, Kelly, who had Down syndrome. Urged by doctors to place him in an institution when he was born, Kelly’s parents chose to raise him in their loving family, so Burk grew up with a special relationship with his uncle and even became his primary caregiver for 14 years.
Today, parents of babies aren’t urged to institutionalize their babies with Down syndrome, but to end their lives before they’re even born. This horrible trend is something Burk is aware of in his goal of writing about the love and joy of people with Down syndrome.
After losing his Uncle Kelly at age 64, three years ago, Burk was inspired to create a children’s book series based on his uncle. With an illustrating background, he started to draw what he thought a children’s book about Down syndrome should look like, saying he wanted Kelly to look different from the other characters so readers would be able to recognize the individuals in real life who may have Down syndrome and reach out to them.
Burk says his goal is to make folks aware that there can be happiness and life beyond a diagnosis:

Those around my grandparents constantly questioned their decision to keep Kelly. It was the 50’s, and most children with Down syndrome were sent away to institutions. The doctors explained Kelly would be in a vegetative state, but to everyone’s surprise he flourished as he mimicked his sibling’ movements, speech and social behavior.
Kelly was brought into this world to show love, kindness and share his contagious smile … He brought fun and excitement to our entire family and made a huge impact on my life. He was joyful, curious, loving, and affectionate. Many things brought him happiness, especially, hamburgers, “I Love Lucy” reruns, game shows, dancing and family. His favorite restaurant quickly learned that he liked to say, “Hacky Birfday!,” which was Kelly’s way of reflecting a good time. The staff would then sing “Happy Birthday!” and bring him ice cream on every visit. He especially loved teasing his siblings and was quite the comedian.

The book’s other characters include a Dalmatian named Tex, Professor Kelso — a stuffed animal koala that teaches children about friendship (the real Kelly always carried a stuffed animal) — and Aaron, Kelly’s friend, someone that Burk hopes the reader will want to be like.  He also hopes kids will be able to relate to Kelly and see that they have far more in common with him than differences.
In the story, Kelly can’t find his shoe. We’re all frustrated when we lose something. Kelly gets anxious in big noisy crowds. Everyone has their idiosyncrasies. Kelly likes routines, and don’t we all have certain routines we’re comfortable with? Like most children, Kelly loves recess, and running around playing is something all children can share. Kelly also loves cheeseburgers and all readers have their favorite foods. “I want to break the barriers and tear down the walls and show them what they have in common with people like Kelly,” Burk says. “But I also want to show them the things that make Kelly, Kelly.”
Burk believes his life was changed for the better by someone whom “the world” would have locked away or even worse, given a death sentence by abortion. “I can’t imagine who I would be if it wasn’t for his example of love.” And he hopes “that Kelly’s story of love, acceptance and HOPE, could change a heart in such a way as to save the life of a baby with Down syndrome.”
Burk says plans are in the works to make the first Kelly book into a series, and introduce a new character named Shannon, a girl who has Down syndrome.  He wants the book series to proclaim, “The world needs who you were meant to be!”

Read more:
He’s 4 years old with Down syndrome, and his brothers’ joyful keeper