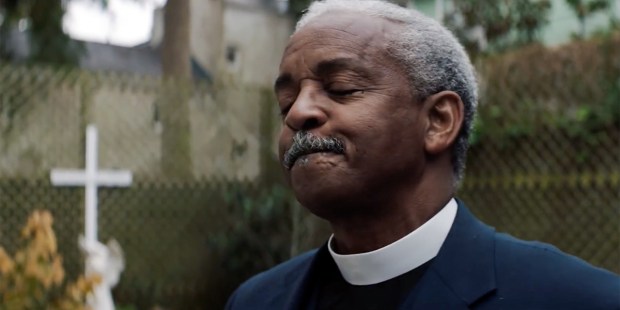 The deep faith of survivors and their family and friends comes through in this story of the 2015 Charleston church shooting.

That’s what Emanuel—the name of Christ, the name of a famous church in Charleston, the name of a powerful new documentary playing in theaters June 17 and 19—means, according to the book of Matthew.

When the prophet Isaiah predicted the coming of a messiah, he said he would be called Immanuel—a name and a role that Matthew explicitly connects to Jesus. And it fit: Christians believe that He was God incarnate, able to walk and talk with us, to teach us and, ultimately, save us. And while Jesus’ corporeal self was swept back home shortly after His resurrection, we believe that God is very much with us still. The very name Immanuel means something else to us, too: hope. That in the darkest of times, our God never deserts us.

On June 17, 2015, a 21-year-old white supremacist named Dylann Roof tried to take that hope away. That evening, he walked into Charleston’s Emanuel African Methodist Episcopal Church, attended a Bible study and opened fire on its attendees. He killed nine people and casually walked out again.

Said one church member in the documentary: “If you want to hurt someone or something, then you go after what matters to them.”

Emanuel, directed by Brian Ivie (and with NBA star Steph Curry and Oscar-winning actress Viola Davis as executive producers), takes the time to tell us why faith, and that church especially, mattered so much. We learn how churches were not only refuges of spiritual hope for blacks in the deep South, both before and after the Civil War, but symbols of self-determination. We get a quick primer on the history of Emanuel itself—the oldest free-standing church in the South, we’re told.

The documentary unpacks Roof’s mindset and motives, too, and—through the accounts of survivors and grieving relatives—takes us into that dark day itself.

One of the most riveting stories comes from Nadine Collier, whose mother died in the attack. When she learned that something terrible was happening at the church, she rushed to the scene—hoping that she’d comfort her possibly frightened but otherwise unharmed mom. Instead, she was barred from the church, unable to enter the crime scene.

“Sir, you don’t understand, my mama’s in there,” she remembers telling the police there. “I need to see my mama, I need to touch my mama … I need to hold her for the last time, and they won’t let me go in.

“Everything I had in the world is gone,” she finishes, weeping. “Last time I saw her she was in a casket.”

We understand her pain, her horror, her emptiness. Most folks in her position would want Old Testament justice—to tear the killer apart.

But Emanuel ultimately isn’t the story of a national tragedy. It’s about what happened next.

At a bond hearing held less than 48 hours later, a shackled, orange-suited, dry-eyed Dylann Roof officially faced for the first time the court, the public and the people he so grievously hurt. And the first victim we hear speak is Nadine Collier. You’d expect her to be angry and hurt, and of course she is. But she wanted to show something else to Roof.

Others stood up, too—people who had lost their aunts, their sons, their wives—and instead of cursing their killer, offered forgiveness, mercy and the very thing that Roof had tried to take away: hope.

“Repent,” said Anthony Thompson, whose wife died in the attack. “Confess. Give your life to the one who matters most: Christ. He can change it, change your ways no matter what happened to you. And you’ll be OK.”

Mass shootings have become sadly commonplace today. But this response … this was unique.

“A lot of people was angry with what I said,” Nadine admits in Emanuel. “But what I said I said from the bottom of my heart.”

You hear some of that anger. Some believed that the apparently unrepentant Roof deserved no forgiveness. “God truly worked a work in [those who forgave him],” said Melvin Graham Jr., whose sister died in the attack. “I’m a work in progress.” Another grieving family member put the matter more bluntly: “Ain’t no way in the world I’m going to forgive him,” he said.

But in an era in which folks grow ever more divided and, seemingly, ever more shrill, Ivie’s powerful, challenging documentary suggests that the way forward is often through a gentler path—a path that Jesus himself showed us.

“I don’t know of any other religious belief system besides Christianity where an innocent man hangs on the cross, suffering immeasurable pain, torment, torture,” says pastor A.R. Bernard in the documentary. “And he looks out over his accusers, and he prays a prayer. Father, forgive them for they know not what they do.”

Immanuel. God with us.

God was hard to feel that night in Emanuel Church. But He was there even then. And in the horror’s aftermath—when faith and forgiveness faced its ultimate test—a handful of hurting believers gave voice to the name’s meaning and power. From the blood came a bit of beauty. In the horror, the movie Emanuel finds a hint of hope.

Emanuel will be in theaters June 17 and 19. Click here to learn more.

Read more:
Forgiving (and asking for forgiveness ) is hard: This can make it easier

Read more:
Called to mercy, one woman finds the grace to forgive her assailants