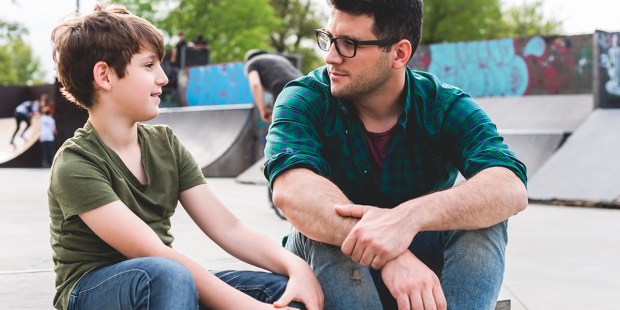 Being a father is the great joy of my life, which is funny because I have almost no clue how to be a good father. I have no training, no techniques, no methods. Essentially, I’m an under-qualified guy faking my way through the job simply through sheer refusal to give up. When to punish? How strict to be? Should they do chores? I have no idea! Children are dizzyingly unique, and mine are so different I interact with each one in ways specific to them.

Fatherhood cannot be prepared for or achieved, it is something that a man becomes in a trial by fire. It transforms him from the inside out. Fathers simply are who we are, for better or worse. Often men are convinced that to be a good father, you must earn a lot of money, purchase the best toys and vacations, sign your kids up for the top sports teams, and present a perfect picture of adult responsibility and invulnerability. Children don’t need all that, though — they simply need their dads. Every morning, all my daughter requires from me before I go to work is a kiss and a hug.

Father’s Day brings to mind one of the great fathers of all time — St. Joseph. Joseph isn’t a famous father because he pioneered a revolutionary new parenting technique, and although his son ended up being successful in his own way, for a time he seemed a complete failure. As a father, Joseph was so quiet that he disappears into the background while his wife Mary remains prominent. Hidden as he is, though, Joseph displays a highly effective parenting style. We might call it “accompaniment.”

Accompaniment is the act of meeting people in whatever circumstances they’re in and patiently walking with them. We might accompany people as friends, as co-workers, in support groups, and — as St. Joseph models for us — as fathers.

Joseph walks with his son as a shepherd, boldly leading his family on a dangerous journey. He’s the one who makes the choice to emigrate to Egypt for their safety. Later, though, as his son matures into adulthood, Joseph takes a step back and allows him to find his own path. As fathers, we lead our families, but must also be ready for them to become leaders in their own right.

Joseph also accompanies his son as a protector. He first protects his wife during her pregnancy, showing that he’s already a father before his son is even born. A father is a source of strength and safety for his children — as well as for his children’s mother — providing them with the confidence to tackle the world head-on.

Someone who accompanies must be a good listener. Joseph often listens. He listens to Mary as she explains her surprise pregnancy and later he listens as his son explains why he went missing from the family for three days. Joseph is rarely recorded speaking, but a father does not always need to be instructing; a good father listens to his children with interest.

This is the most important way Joseph accompanies his son: he is always there. Although he’s a quiet man, he’s always around. In our lives as fathers, we may not be able to fix everything for our own children, but we can always be there and never abandon them.

St. Joseph inspires me to be a better father. In my own life, accompaniment means that I’ll cheer my son when he gets a hit in his baseball game and buy him ice cream when his team suffers a big loss. I’ll be sure my tween daughters know I want to spend time with them. I’ll take them to the coffee shop and let them talk about whatever they want without trying to give them too much advice. Whenever they look back on their lives at all their biggest moments, I hope that they will see me right there next to them.

Children are searching for their place in life, a process that is highly fraught. They will be anxious. They’ll lash out. They’ll be confused and over-react and moan that their life is ruined. They’ll go through stages of being embarrassed by me or embarrassed of themselves. The world is a vast place, full of tempests and trials. The still, calm place in the middle of that whole, wonderful mess we call growing up is a father. A father is a solid place to stand when everything else is chaotic. But for a father to be that place of safety, he must be there, accompanying his children through it all, never pushing them away because he’s disappointed, never trying to make them something they’re not, but also being sure they know he cares and that he will give them advice once they’re ready to hear it.

Accompaniment is tough, though. Because while we gently guide our children and shape their development, we ultimately don’t get to be in charge of their most intimate thoughts; those are theirs alone. But even here, St. Joseph can be our example that, if we walk with our children and trust them, they’ll turn out just great.

Read more:
What Evelyn Waugh can teach us about fatherhood