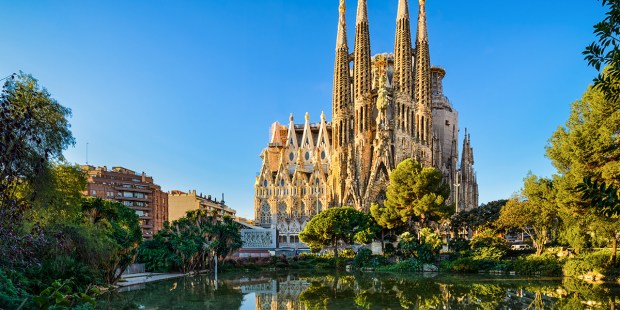 Gaudi’s masterpiece finally got a construction permit. But a 137-year bureaucratic bottleneck is not the only unique fact about the Sagrada Familia.

Last Friday, Barcelona finally gave the green light for the construction of Antonio Gaudi’s architectural masterpiece, the Sagrada Familia. The request for construction had been submitted in 1885, but it took authorities 137 years to address the query. In the meantime, work had begun but was never completed as Gaudi, a devout Catholic, died in a tram accident in 1926.

Now, the teams of architects working to complete his vision think that the cathedral could be completed by 2026, a hundred years after Gaudi’s passing. But centuries-long bureaucratic bottlenecks are not the only unusual feature about this church. Here are five amazing facts about one of the most wondrous Cathedrals in the world.

1. It was almost destroyed during the Civil War.

When Spanish Civil War broke out in 1936, a group of anarchists occupied what was then an early version of the Sagrada Familia. They set fire to the crypt and destroyed most of Gaudi’s blueprints, drawing and plaster models. It took researchers 16 years to re-assemble the lost documents by collecting surviving fragments.

2. Stones were sourced from Montjuïc mountain.

The Sagrada Familia’s iconic sandy color was obtained by using sandstone from Montjuïc, a hill where the Spanish master built his famous architecture park, Parc Güell. Gaudi chose this particular kind of sandstone both because of its durability — most of its grains are made of quartz — and because of its chromatic variability, as the stones come in shades of gray, pink, brown and even blue.

The church was left unconsecrated for years, as it was not completed. But in 2010, Pope Benedict finally recognized it as a basilica during a ceremony that attracted 6,500 people. “May this faith find new vigor on this continent and become a source of inspiration,” he said at the end of his visit.

Shortly after his death from a tram accident in 1926, Gaudi was buried in a stone-walled crypt inside the Chapel of the Virgin of El Carmen in the underground crypt of the Sagrada Familia. Architects plan to finish construction by 2026 in time for the 100th anniversary of his death.

5. Its license permit is the most expensive ever recorded in Barcelona.