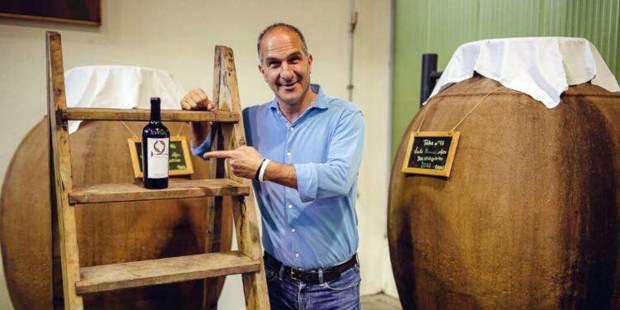 Vinyards are popping up all over the Armenian highlands, continuing the millennia-old wine tradition purportedly started by Noah.

When the Great Flood subsided and Noah famously landed his ark upon what many believe to be Mount Ararat, the old shipwright disembarked and, we are told by the biblical narrative, he began planting vineyards, fermenting wine, and getting drunk. As there was no mention of alcoholic beverages prior to this account, the discovery of fermentation became attributed to Noah, and thus such spirits became affectionately known as “Noah’s Wine.”

Very little is known of Noah’s winemaking, aside from a few brief lines in Genesis, but now, thanks to a team of American and Armenian archaeologists, we know that the region surrounding Noah’s landing point was utilized for vineyards as far back as 6,100 years ago. In 2007, they discovered a cave, called Areni-1, where they found a four-foot basin made of hard-packed clay, inside of which were buried large clay pots or karas used in the process of wine fermentation.

From the traces of grape juice within the karas, the team determined that this may indeed be the oldest example of an intentional fermentation operation. Also discovered at the site were seeds, stems and grape cells, which researchers are studying to see if they can be revitalized and brought back. This strain, areni, named for the region, is such an old cultivar that it has no known ancestors.

There are many such varieties of ancient strains of wine grape, and one vintner, Vahe Keusgheurian, has opened several nurseries on his vineyard in order to study the indigenous vine varieties, 300 of which have already been discovered across Armenia’s nearly 42,000 acres of vineyards. Keusgheurian, who is known as the “Godfather of Armenian grapes,” told Wine and Spirits that he is hoping, “to see if [he] can find a jewel.”

Zorik Gharibian of Zorah winery is currently working with strains of areni, attempting to revive the ancient fermentation process and utilizing what few karas he was able to muster. The art of crafting ancient karas has been forgotten, but there are surviving pieces from the 19th century, which he was able to acquire. His wife, a potter, plans on opening a pottery school that will teach people to make these ancient casks again.

Gharibian hopes to keep his operation small for the moment, and is producing about 100,000 bottles per year, but there are other vineyards that are producing ancient varieties of wine that can be traced far back into Armenia’s history.

In 2000, Gharibian brought in Italian oenologist Alberto Antonini to give an expert opinion on the wine. Antonini looked at the piles of limestone and volcanic rock and considered the extreme elevation and climate before flatly declaring, “It would be impossible not to make great wine from this site.”

While these operations are still quite new and it takes many years for a vinyard to come into its own production-wise, it is possible that very soon we may all be able to gather around and share a beverage that is not too far from the type Noah created in the years after the Flood.