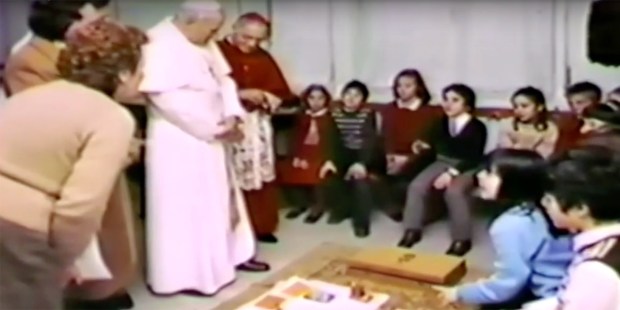 It confirmed for him that the Kingdom of God belongs to children.

Throughout the past century catechists around the world have tried to communicate the Gospel in a way that leads to an authentic relationship with God and a deeper understanding of the theological truths of the Catholic Church. Recently one method of catechesis has born much fruit, and was praised by St. John Paul II for its beauty.

It is called the “Catechesis of the Good Shepherd” (CGS) and was developed in the mid-20th century by Maria Montessori (famous for the “Montessori Method of Education”), Sofia Cavalletti, and Gianna Gobbi. The Good Shepherd Catholic Montessori school gives a succinct explanation of this particular method of education.

CGS uses Montessori teaching principles to present the most essential realities of the Catholic faith to even very young children. Specially designed materials and inspiring presentations help children explore areas of faith formation appropriate to their developmental age … Scripture, liturgy, salvation history, and sacramental signs provide the content of the catechesis – with a special emphasis on scripture. The methodology of the Catechesis utilizes Montessori teaching principles to help children develop an informed and genuine relationship with God.

CGS is officially part of the formation program of St. Teresa of Calcutta’s order, the Missionaries of Charity, and is used by the sisters in their various apostolic endeavors. It has also seen a large resurgence in the United States during the past 10 years, with various “atriums” opening throughout the country. The Archdiocese of New York “has established the Catechesis of the Good Shepherd Level One, ages 3-6, as its preferred pre-school program,” while also encouraging parishes to include CGS for ages 6-12.

It is difficult to adequately describe CGS in words. It is best experienced in person. Cenacle Resources offers a short video clip that offers a glimpse inside a CGS program.

When St. John Paul II visited an atrium in Rome, he reportedly said, “That is the most beautiful homily I have ever witnessed.” Sofia Cavalletti describes his visit in a video shown below, further adding that he said, “It is proof that really the Kingdom of Heaven belongs to the children.” He attentively “listened” to the children as they were immersed in their “works” and saw something special about this unique approach to religious education.

If you are interested in learning more about this method of catechesis, visit an atrium near you.

Read more:
The Montessori rule that changed the way I parent