Kate Middleton has a vital message for parents 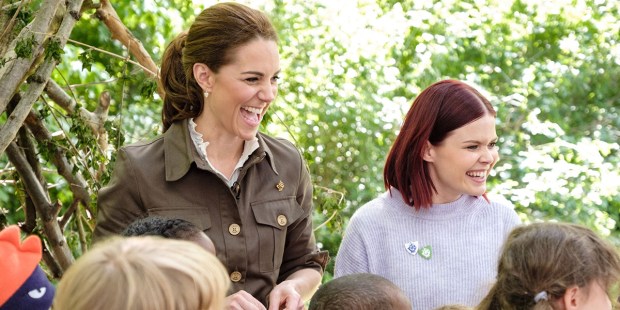 The Duchess of Cambridge champions the great outdoors for a very worthy reason.

In a break from the usual style watch, the Duchess of Cambridge has been in the news recently for her gardening skills and a very important message she wants to pass on to families.

Last week she made a surprise appearance on a children’s television show, Blue Peter, to kick off a children’s outdoor sculpting competition. During her time on the show she shared her belief in the benefits of the great outdoors, explaining that her kids are forced outside “come rain or shine,” as she believes “it encourages creativity and confidence, even for a very short period of time – just 10 or 15 minutes outside makes a huge difference to both physical and mental well-being,” as reported in Town and Country Magazine.

During her time on the show, she also showed her own love of being surrounded by nature. Accompanied by school children she not only caught a newt and built a den — something she loves to do — but she also planted some Sweet William flowers — a romantic gesture to her husband, Prince William.

#BluePeter is teaming up with Her Royal Highness, The Duchess of Cambridge, for an amazing competition 🌱🍂

Find out more in tonight's episode of Blue Peter on CBBC at 5:30pm!

This latest initiative is on the back of her impressive woodland garden for children that she co-designed last month with the help of some seasoned gardening experts at the prestigious RHS Chelsea Flower show — an annual event, attended by the Queen, that attracts experienced gardeners from around the world to compete in creating wonderful garden designs.

The garden is a haven for children, with the intent to encourage kids to get outside more often. As a nature lover herself, Kate wanted to raise awareness of how gardening can help mental health, especially in children. A Mori Poll that showed in fact that “80% of people who garden say gardening has a positive impact on their mental health.”

So partnering up with the National Health Service and gardening professionals, Andrée Davies and Adam White, the princess created the Back to Nature garden, “a place to retreat from the world, to play, learn and discover as well as create special family memories,” according to the event’s website.

The temporary garden — including a waterfall, stream, rope swing, and even a tree house — is a beautiful reminder to get outside and enjoy nature, with many queuing up to two hours to visit the garden, as Hello Magazine reports. And after the show, having won a national competition, the Devon Partnership NHS Trust Dewnans Centre will become the lucky beneficiaries of the garden on a permanent basis.

👀 We invite you to take a sneak peek at The Duchess of Cambridge’s #RHSChelsea ‘Back to Nature’ Garden! The woodland wilderness garden aims to get people back to nature, and highlight the benefits of the natural world on our mental and physical wellbeing. Speaking ahead of @The_RHS garden unveiling, The Duchess of Cambridge said: “In recent years I have focussed much of my work on the early years, and how instrumental they are for outcomes later in life. I believe that spending time outdoors when we are young can play a role in laying the foundations for children to become happy, healthy adults.” Some features of the #ChelseaFlowerShow garden include: 1. A swing seat hanging below the garden’s centrepiece, a high platform tree house, encouraging creative play and discovery for all generations. 2. The high platform tree house is inspired by a bird or animal nest and provides a wonderful place to retreat and look out through the trees. The treehouse is made from chestnut, with hazel, stag horn oak and larch nest cladding. 3/4. The garden is aiming to inspire interaction with the natural environment through its multi-sensory, green and blue plant scheme. The garden will be filled with incredible edibles, plants for craft activities, forest scents and a diverse range of plants, shrubs and trees of different heights and textures. The garden forms part of Her Royal Highness’s ongoing work on early childhood development and her mission to support efforts that give every child the best possible start in life. The Duchess has committed to making early childhood development the focus of her work in the years to come, and believes that providing children with the opportunity to spend time outdoors can play an important role.

With the show garnering media attention from around the world, the Duchess of Cambridge was able to demonstrate a natural talent for gardening herself while passing on a vital message:

“What a child experiences in those really early years directly affects how the brain develops and that’s why I think that it’s so important that all of us, whether we’re parents or carers or family members, really engage in quality time with children and babies from a really, really young age.”

The garden also got the thumbs up from her eldest son, Prince George, who was one of the first to try out his mom’s creation. When asked by his father, Prince William, to rate it, the third-in-line to the British throne gave it a whopping 20 out of 10 — just click on the video below to see his adorable response.