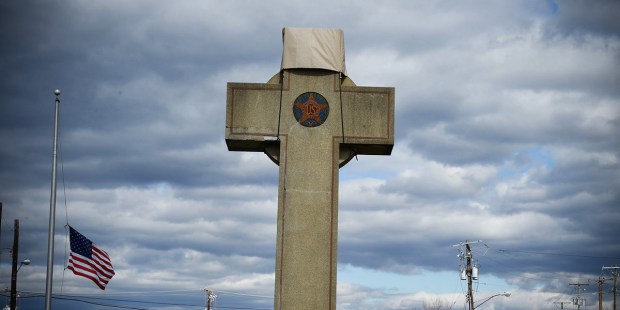 A religious symbol may continue to stand on government-owned land, the U.S. Supreme Court ruled today.

The Bladensburg Peace Cross, memorializing First World War dead from Prince George’s County in Maryland, is a Christian symbol, justices acknowledged. But because it has come to mean different things for different people, removing it would cause further division in American society.

By a vote of 7-2, the high court reversed a lower court ruling that said the cross was an unconstitutional endorsement of religion. Justices Ruth Bader Ginsburg and Sonia Sotomayor dissented.

Ginsburg said the decision to maintain the cross-shaped monument on public land “erodes” the constitutional principle that “demands governmental neutrality” in regards to religion. By using a cross to memorialize the dead, the state of Maryland “places Christianity above other faiths” and sends the message to people of other faiths that “they are outsiders,” she complained.

“Making a Latin cross a war memorial does not make the cross secular,” Ginsburg charged. “Quite the contrary, the image of the cross makes the war memorial sectarian. The Peace Cross is no exception.”

But Justice Samuel A. Alito Jr. said that the fact that the memorial is in the form of a Christian symbol “should not blind us to everything else” that it has come to represent.

“For some, that monument is a symbolic resting place for ancestors who never returned home. For others, it is a place for the community to gather and honor all veterans and their sacrifices for our Nation. For others still, it is a historical landmark. For many of these people, destroying or defacing the Cross that has stood undisturbed for nearly a century would not be neutral and would not further the ideals of respect and tolerance embodied in the First Amendment.”

“Bladensburg’s ‘Peace Cross’ honors veterans who gave everything to serve their country, and the Supreme Court’s decision means that the memorial will continue to honor their memory,” said Alliance Defending Freedom Senior Counsel and Vice President of U.S. Litigation David Cortman in a statement. “We commend the court for ensuring that one group’s offended feelings over the memorial won’t diminish the sacrifices of our veterans or dismantle their memory. A passive monument like the Bladensburg Cross, which celebrates those who died to defend our Constitution and acknowledges our nation’s religious heritage, simply does not amount to an establishment of religion.”

Some who applauded the ruling, however, expressed concern that the opinion did not go further.

“Today, the Supreme Court delivered a much-needed win for the Peace Cross and similar memorials,” the Family Research Council said in a statement. “In no way do such memorials violate the Establishment Clause of the First Amendment. However, this decision leaves in place the tangled confusion of past Establishment Clause opinions, which are currently being used to remove religious messages, signs, and symbols from public squares around our country.”

The 40-foot granite and cement cross was built in 1925 and paid for by local families, businesses and the American Legion to honor 49 soldiers who never made it home from European battlefields. But the cross sits on a now-busy highway median owned since 1961 by a state commission that pays for its maintenance and upkeep, the Washington Post explained:

The legal challenge began with the American Humanist Association, a nonprofit atheist organization that has filed similar lawsuits throughout the country.

The Maryland-National Capital Park and Planning Commission, which inherited the monument, says the court need not break new legal ground to allow the Bladensburg landmark to remain.

The monument’s defenders say a Maryland district court judge got it right when she noted that the cross had stood for decades without controversy and that it met the test that the Supreme Court has established for such controversies: that it had a secular purpose, that its “primary effect” was religious neutrality and that there was not excessive entanglement of government and religion.

A panel of the U.S. Court of Appeals for the 4th Circuit looked at the same facts and the same test and concluded otherwise.

“The display aggrandizes the Latin cross in a manner that says to any reasonable observer that the commission either places Christianity above other faiths, views being American and Christian as one in the same, or both,” the panel said in a 2-to-1 ruling.