Jesus is commanding you too: Feed them! 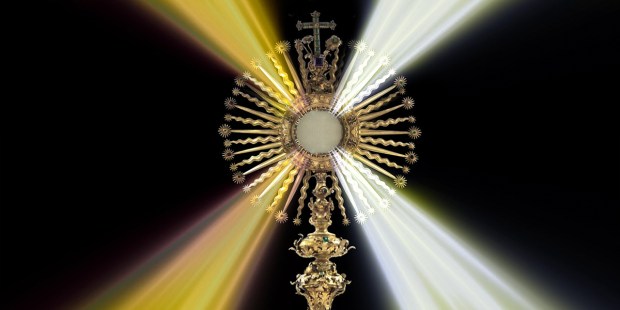 Perhaps Mr. Blue might help us understand that the Eucharist has power.

Taking the five loaves and the two fish, and looking up to heaven, he said the blessing over them, broke them, and gave them to the disciples to set before the crowd. They all ate and were satisfied. —John 16:5

In 1928, Myles Connolly published a small novel entitled Mr. Blue, which tells the story of a young man who decides to live out the Christian Faith in a serious, transforming way. Blue lives a life of extremes, we might even say of excess, but it is a far cry from the extravagance of the “Roaring ‘20s.”

Mr. Blue has much to say to us about how faith in Christ can shape a life, transforming a person’s very existence into an act of eucharistia—an act of thanksgiving—that by its very nature draws others into communion.

Read more:
10 Catholic novels to take to the beach this summer

In the novel, Blue tells the story about the kingdom of the Antichrist: the days of the “the ecstatic, passionate, beauty-loving, liberty-seeking people had, as was early predicted, come to a close. The sluggish frigid races had survived.” In the climax of Blue’s tale of a new world in which even laughter and curiosity had been forbidden by law, a priest, the last Christian, climbs the highest tower in a city of metal and, using hosts made from wheat he has grown himself, offers the last Mass, fulfilling his promise to “bring God back to the earth.” As the government’s forces prepare to destroy the priest high atop the tower using planes and bombs, the priest began to repeat the words of Christ at the Last Super (cf. 1 Corinthians 11:23-26):

One plane is now low over the roof of the tower, so low that the crew can make out the figure of the cross on the priest’s chasuble. A bomb is made ready …

And now the priest comes to the words that shall bring Christ to earth again. His head almost touches the altar: Hoc est enim corpus meum …

The bomb did not drop. No. No. There was a burst of light beside which day itself is dusk. Then a trumpet peal, a single trumpet peal that shook the universe. The sun blew up like a bubble. The stars and planets vanished like sparks. The earth burst asunder … And through this unspeakably luminous new day, through the vault of the sky ribbed with lightning came Christ as he had come after the Resurrection.

This image of a lone priest standing atop a tower in a burned-out world from which even the most basic expressions of joy, fraternity, and human freedom had been banned is a powerful one. It’s an image that always comes to mind as I reflect on this feast of Corpus Christi. But the power at work here isn’t in the revolutionary act of the priest but in the way we are reminded of the expansive power of the Eucharist.

In the same way, in our sharing in the Eucharist is an act of communion and we are brought into the life of Christ and the Church, as we are brought out of ourselves. We are raised up into the expansiveness of the Eucharist in a way that transcends any personal acts of devotion because we are given a share in the life of God which is itself expansive, always self-giving, and always oriented to others.

We are reminded of this when, in the account of Jesus feeding the multitude with only a few fish and loaves, he gives the command: “You feed them!”

And so, we do. We take the gift we have been given, the life we have been brought into by our act of communion, and we share that with others.

How do you understand the Eucharist as an invitation to share yourself with others? What gifts do you have that can support and nourish others?

How is the mystery of the Eucharist greater than receiving Holy Communion?

What does this Sunday’s celebration of the Most Holy Body and Blood of the Lord teach us about our daily celebrations of the Eucharist? About the abiding and real Presence of Jesus in the Eucharist?

Words of Wisdom: “Let us walk generously and courageously, seeking communion within our ecclesial community, and lovingly dedicated to humble and disinterested service to all, especially the neediest … On this journey Jesus goes before us, with the gift of himself to the point of sacrifice and offers himself to us as nourishment and support … break this bread of eternal life for everyone. A demanding and exalting task. A mission that lasts until the end of time.” –St. John Paul II

Read more:
Why Are 2 Different Popes Telling Us to Read “Lord of the World”?