Married men can be ordained priests under these circumstances 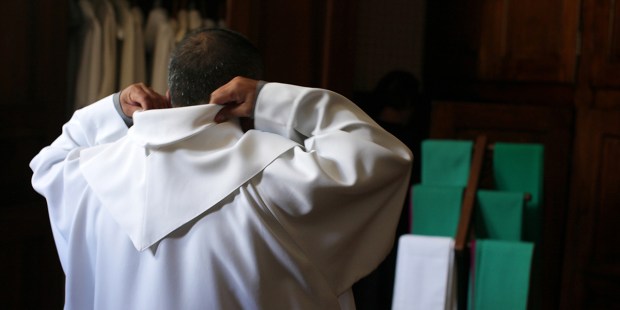 While celibacy is preferred, there are always exceptions to the rule that are consistent with the traditions of the Church.

While Roman Catholic priests are usually celibate (i.e. unmarried), this practice is a long-held discipline of the Church. That means that under certain circumstances, a priest might be married. This discipline (something that can change) is distinct from the dogma that priests must be male. The reasons for the discipline of celibacy are grounded in the example of the life of Christ himself, even as the Church’s understanding of the practice has developed over time.

Undoubtedly, the disciples of Jesus immediately recognized the value of celibacy, especially for those engaged in priestly ministry. St. Paul was the most vocal advocate for priestly celibacy, arguing that marriage by necessity divides a person’s attention.

Following the Apostolic age, two priestly traditions developed in the Church: one that openly preferred celibacy and another that accepted married men. Generally, monks practiced celibacy, as did bishops, while married men could be ordained priests.

By the 12th century, the Roman or “Western” Church held firmly to the practice of a celibate priesthood, while the Eastern Church continued to ordain married men. Both traditions were accepted by the Catholic Church. The Eastern Church, while often ordaining married men to the priesthood, has always maintained a celibate episcopate, only choosing bishops from priests who were not married.

This has remained the case up until the present day.

In recent years, however, the Latin Church has allowed more married men to be ordained priests, according to specific cultural circumstances. For example, a married Protestant minister (whether Lutheran, Episcopalian, Anglican, or otherwise) who converts to the Catholic Church can, with special permission from the Holy See, be admitted to the Catholic priesthood. These men are already familiar with balancing ministerial demands with the demands of their marriage and are culturally prepared to take on the responsibilities of being a married Catholic priest. This is often the case in the Ordinariates established by Benedict XVI for Anglicans who wished to join the Church.

One clarification to understand is that while married men can be ordained priests, it is never permitted for an ordained priest to get married. Marriage must precede ordination.

Above all, the priesthood demands conformity to Christ and love for His holy people. Being a married priest inevitably divides the priest’s attention and invites new challenges to priestly ministry in the modern world. It implies incredible demands on the priest’s wife, who must be able to carry many responsibilities while her husband’s attentions are on sacramental ministry.

Ultimately, we must remember that no man is ordained a priest for his own sake. The priesthood is not a job applied for or a career undertaken. The priestly vocation is ordered to the salvation of souls, by preaching, teaching, and sacrifice. The holy priesthood, however vibrant or ailing, belongs to Christ and his Church. Total unity with the Church is the only way to ensure that the prophetic and salvific mission of Christ can be carried on by priests today.

Read more:
What is a seminary and who goes there?