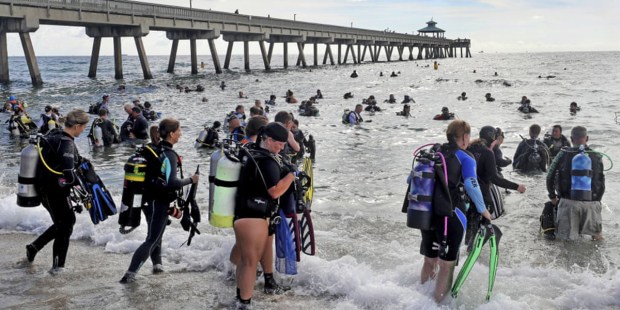 One Florida beach was awash with scuba divers doing their best to clear up decades of debris.

If you were in Florida last week you might have been surprised by the sight of 633 divers emerging from the ocean. In a bid to help the environment, while setting an impressive record, Dixie Divers hosted the two-hour clean-up by both adults and children.

Next to Deerfield Beach International Fishing Pier, an adjudicator from the Guinness World Records, Michael Empric, took 15 whole minutes to count every participant as they took to the waters to simultaneously clean up garbage in that section of the ocean. Each scuba diver had to stay for at least 15 minutes to be included in the record.

The previous record holders were 614 divers who helped rid the Red Sea of debris in 2015. While these initiatives are exciting for their record breaking efforts, the result of the clean-up is even more impressive. Although the amount of garbage hasn’t all been weighed yet, there are 1,600 pounds of lead fishing weights already counted — left behind by anglers cutting the weights off to free their lines, according to the Independent.

It’s also a great lesson for the younger generations to see the effects of years of dumping rubbish into the sea. One such participant, 13-year-old Dahlia Bolin, made her way all the way down from Illinois to take part in the dive, retrieving a warning sign saying: “Boats Must Not Come Within 100 Yards of Pier” to add to the litter pick-up. Hopefully she can help spread the message so that future generations are more aware of caring for God’s creation.