Meet Melchizedek, one of the most intriguing characters in the Bible 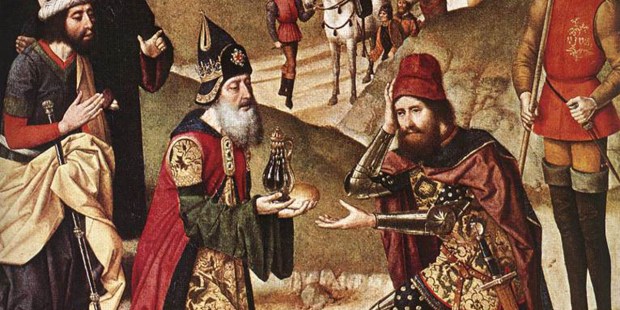 Mentioned only twice in the Old Testament and once in the New, Melchizedek is nevertheless the archetype of a priest. But why?

Melchizedek is only mentioned twice in the Old Testament: once in Genesis and once in a Psalm. He is, surely, the first person in the Bible to be titled a priest. In the book of Genesis (Gen 14:18-20), after defeating a coalition of Mesopotamian kings to rescue his kidnapped nephew Lot, Abraham is greeted by Melchizedek, who gives him bread and wine:

It is not clear (and there is plenty of rabbinical discussion on the matter) who gave tithe to whom, but Melchizedek’s offering of bread and wine has been read by Christian scholars as (obviously enough) a typological precursor of the Eucharist. In fact, in the Epistle to the Hebrews, Christ himself is described as “high priest forever in the order of Melchizedek,” following the formula we find in Psalm 110, in which the character is mentioned (“The Lord hath sworn, and will not repent: ‘Thou art a priest for ever after the manner of Melchizedek’”). This is how Melchizedek then found his way into the Roman Canon, in the First Eucharistic Prayer of the Roman rite of the Catholic Church, and also into the Roman Martyrology, being commemorated on August 26.

Now, Genesis claims Melchizedek was a king and the priest of “the most high god,” but the Psalmist only affirms he was a priest. Who was Melchizedek, then? Maybe the answer to this question lies is in the name itself.

In most Masoretic Hebrew texts, Melchizedek’s name is written as two separate words: Meleki and Sedek, Melek meaning “king” and “sedek” either “righteousness” or the proper name “Zedek.” The “i” in “Meleki” is a possessive particle, so “Meleki Sedek” might mean either “King of Righteousness” or “my King is Zedek,” Zedek being a Canaanite deity often worshiped in pre-Israelite Jerusalem. This second translation, however (that of “my King is Zedek”), is contested because of the blessing Melchizedek himself pronounces: when he blesses Abraham, he also blesses “the most high God,” “El Elyon” in Hebrew, most likely referring to the main deity of the Canaanite pantheon. This appellation was later adopted by the Hebrews to refer to the God of Abraham. In fact, this appellation is commonly used in the Psalms (more than 20 times), and most likely the “El” of “El Elyon” was already identified by the authors of the book of Genesis with Yahweh, the god of Israel.

However, this doesn’t seem to shed much light on whether Melchizedek was an actual king or if he merely received some sort of honorary title as “king of righteousness” because of his exemplary priestly life. Did Melchizedek have a kingdom to rule?

This is also a tricky question. Abraham recognizing the authority and authenticity of a Canaanite king-priest might be quite startling at first glance. Some biblical scholars would argue the figure of Melchizedek was added to the Abrahamic cycle with very clear ends in sight.

The text of Genesis claims Melchizedek is king of Salem. Most likely, this Salem is indeed Jerusalem, the capital of David’s kingdom. Some scholars argue the story of Melchizedek might have reached its definitive formulation in the Davidic era, serving as some sort of apologia for David’s own reign and its priesthood, ministering in Jerusalem. In fact, David himself performed tasks that were otherwise assigned to the priests alone (1 Sam. 21:1–6; 2 Sam. 6:12–15) and would have had ultimate jurisdiction over the priesthood (1 Kings 2:27, 35). Abraham’s own recognition of a priest-king would then be an anticipation of the days in which Abraham’s descendants would pay tribute to David. In fact, when Psalm 110 refers to Melchizedek the priest-king (the “high priest forever in the order of Melchizedek”) as a prototype of the coming Messiah, it is clear this Messiah is a descendant of David himself. It is this allusion to the Davidic line that led the author of the Letter to the Hebrews to understand Melchizedek as foreshadowing Christ, the definitive true king of righteousness (zedek) and peace (salem).