The Island of Saint Julius is home to a Benedictine monastery that seems to be stuck in time.

From Rome’s St. Peter’s Basilica to St. Mark’s in Venice, to Milan’s Gothic “Duomo,” every region of Italy takes pride in its great Catholic landmarks.

For Catholics in the northwest city of Novara, their source of pride is probably the monastic complex of the island of Saint Julius, a 900-foot long stretch of land in the middle of Lake Orta. 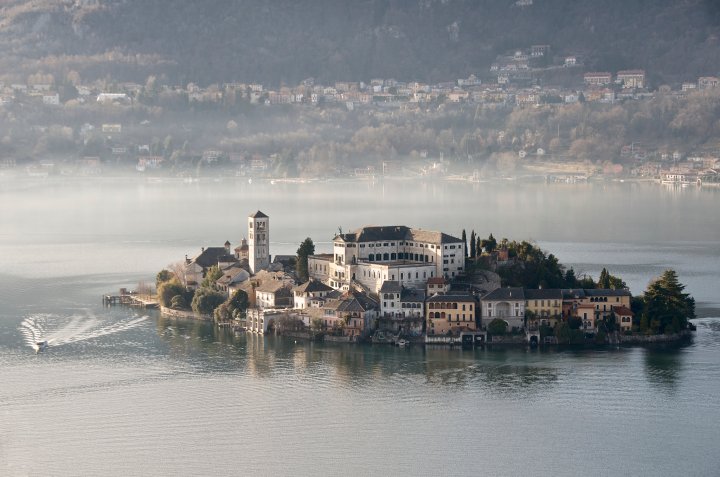 The island’s Catholic history dates back to the 5th century, when a chapel was built on the island, possibly to commemorate the evangelizer St. Julius, who died there. A 12th-century Romanesque basilica was later erected, which was replaced by the 18th-century monastery, which has been occupied by Benedictine nuns since 1976.

According to archaeological evidence, humans first settled in this picturesque stretch of land during the Neolithic period, and the first Christian settlement can be traced back to the 4th century. That’s when, according to a tradition, St. Julius, who was travelling from his native Greece to northern Italy on an evangelical mission, first set foot on the island by floating on his mantle.

Upon witnessing the presence of snakes and lake monsters, which were considered to be symbols of the devil in medieval culture, St. Julius decided to build a Catholic church, and turned the tiny island into the center of his evangelical mission.

Today, a bone belonging to an undefined amphibious creature is still preserved in the island’s Romanesque basilica as proof of its miraculous origins. The relics of St. Julius himself are also preserved inside the 12th-century structure built right by the water.

Throughout the Middle Ages, Saint Julius island was an important military center, and during the 11th century the Emperor of the Holy Roman Empire, Otto I, fought against Italian troops aligned with King Berengar, an event that probably led to the destruction of the original church.

That’s also when soon-to-be Benedectine monk William of Volpiano was born. After receiving his education from Mayeul of Cluny, who served as a bishop at the famous Abbey of Cluny in France, William became a prominent figure of the order and helped design and establish many places of worship around the European continent, including Mont Saint-Michel.

His Benedictine tradition is still kept alive today by the nuns of the Benedictine Convent of Saint Julius island, which was started in the previous bishop’s quarters in 1973 by a group of nuns who relocated from the nearby Abbey of Viboldone.

Today, the monastery is the crown jewel of local Christian sites, with pilgrims flocking to the island every January 31 to celebrate the day of Saint Julius, patron saint of builders. Visitors coming on that date should be ready to take part in the traditional lamb auction, where lambs from local shepherds get sold to the highest bidder, and to taste the famous “bread of Saint Julius,” baked by the nuns to celebrate the holiday.

During the rest of the year, the monastery is open for visitors (apart from the month of November) who can walk around its beautiful gardens and witness some of the daily monastic activities carried out by the nuns, including gardening, typography and ancient book restoration. To visit from Milan, you can take a local train to Orta and local taxi boats.