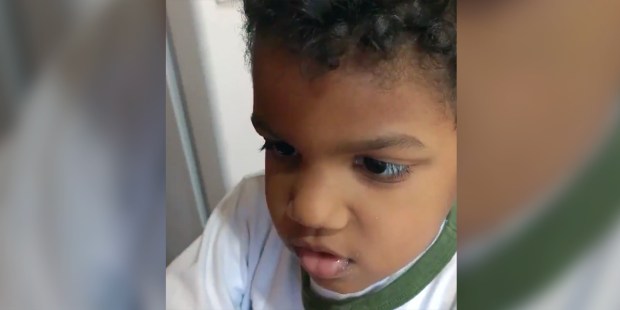 Thanks to his older siblings singing “Old Town Road,” a four-year-old is finding a way to communicate.

When parents have a child who is non-verbal, they hang on to every single word their child utters. Trying to determine the thoughts, needs, and emotions of their offspring can be very frustrating for both the child and the parents. So when Sheletta and Shawn Brundidge heard their child murmur the words to a song, his mom made sure she captured the moving moment on video.

The Brundidges are parents to four children: Andrew, 12, Brandon, 6, Cameron, 5, and Daniel, 4. Their three youngest kids have all been diagnosed with autism, but Daniel doesn’t appear to be as responsive to therapy as his older siblings. The result is that he is practically non-verbal, managing three-word phrases such as “I want bottle,” at the most.

But thanks to his siblings, Daniel may have found a new way to communicate. In most families, younger children love to mimic their bigger brothers or sisters, and although Daniel may have autism, he still looks to his siblings for inspiration. Over the last few months singer Lil Nas X’s song Old Town Road has been proving a family hit. While Daniel’s older siblings have been singing away to the catchy tune, the four-year-old seems to have taken it all in. When he and his mom were having a quiet time in the kitchen, much to his mom’s delight and surprise, she found her son humming along to the tune. As she posted on Twitter: “Then Bless God, my baby started singing the song on his own.”

We had an #oldtownroad miracle at my house. My son Daniel has #autism and doesn't talk. We caught him humming the @LilNasX and @billyraycyrus tune the other day. Then Bless God, my baby started singing the song on his own. His therapists have started to use it in his sessions! pic.twitter.com/vtCNWeg6ax

Naturally on hearing these new words, Sheletta “lost it.”

“For him not to be taught something by a professional, but to hear it, absorb it and recall it all on his own, that lets us know he’s ready,” she explained. “And we’ve been speaking the wrong language. He just needs us to speak his language, and his language is music.”

The video of Daniel singing along has been shared over a million times now, and demonstrates once more the miracle of music. Hopefully Daniel’s therapists can incorporate this type of emulation into his therapy sessions which could help the young songster find his voice. Of course this might mean that his big brothers and sister have to start coming out with some different hit songs, but they’ll probably be happy to oblige.

Read more:
Blind and partially paralyzed, he went to World Youth Day with a mission

Read more:
My autistic son can’t talk, but God still speaks through him