As a young Jesuit, the future pope longed to go to Japan. Will he now? 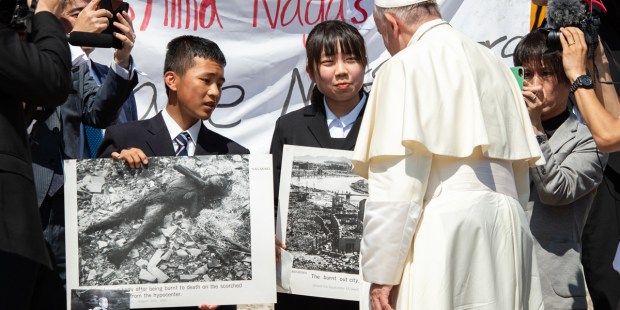 Fr. Bergoglio wasn’t healthy enough to be a missionary in Japan, but it looks like in November, he’ll finally fulfill his dream

When young Jorge Maria Bergoglio joined the Jesuits, he longed to be a missionary in Japan. He wasn’t able to, because his health was never considered good enough. (He had to have part of a lung removed as a teen). But now as Pope Francis, it seems his chance is coming.

Though not yet confirmed by the Vatican, there is talk of a papal visit to Japan for four days in November, according to local Japanese media. It is said the Sovereign Pontiff would visit the capital and two cities affected by the atomic bombs.

In January, the pope told reporters that a papal trip would happen in November, though the Holy See soon tempered this claim, stating that such a move was still “under consideration.”

According to NHK, the trip would last four days, with arrival in Tokyo on November 23. This date is consistent with the information provided by the Prefecture of the Papal Household announcing that the general audience on November 20 and the Angelus of 24 November are canceled. Generally, this is a sign that the Successor of Peter will be abroad on those dates.

On November 24, the head of the Catholic Church would visit the cities of Hiroshima and Nagasaki, the two cities hit by US atomic bombs in 1945. He would visit the Peace Memorial in Hiroshima, while in Nagasaki he would pray in the cathedral rebuilt after the nuclear explosion. In both cities, the Bishop of Rome would undoubtedly speak out strongly against nuclear weapons. This is indeed a major concern of the Sovereign Pontiff, who has already expressed concern about a “suicide” of humanity by accident.

November 24 is also the anniversary of the signing in 2013 of the Joint Plan of Action regarding Iran’s nuclear program, a pact that is increasingly compromised, especially in recent days with the escalation of tensions between the US and Iran.

On November 25, Pope Francis would return to Tokyo for a courtesy visit to the new Emperor Naruhito and Prime Minister Shinzo Abe. The same day he would celebrate a Mass at the Tokyo Dome, a stadium of 55,000 seats.

This first visit by a Successor of Peter in Japan since 1981 could be preceded or followed by a stop in another country. There are many rumors about Thailand being the option, or also Hong Kong. The latter case would be historic, since it would be the first time in history that a leader of the Catholic Church would place a foot in China.