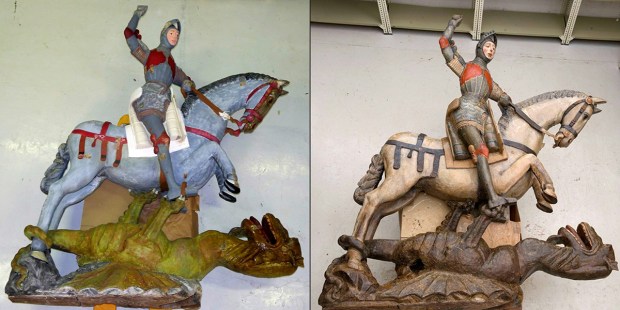 The parish and original restorer both face fines for damaging the protected historic piece.

A little over a year after a 16th-century sculpture of St. George was all but ruined by another well-intentioned “restoration,” the government of Navarra, Spain, has stepped forward to give the piece a proper restoration job.

When the original 500-year-old statue was in dire need of a makeover, the job somehow landed in the hands of a local teacher working for the arts-and-crafts workshop company Karmacolor, who worked without the supervision of municipal authorities. When pictures surfaced online of the new, surprised looking, wall-eyed St. George, it didn’t take long for the cartoonish paint job to go viral.

Now, thanks to a $34,000 investment, the “unrestoration” project has been completed and the statue has been made to better resemble its original appearance. The botched restoration job is not completely forgotten, however, as Carlos Martínez Álava, head of the historic heritage department, explained to The Guardian that “part of the original paint” has been lost. He said:

“The bits of paint that were lost have been filled in and from a distance it all looks the same. But when you get up close, you can see very clear what’s original and what’s not.”

The extent of the damage was highlighted in a statement by ACRE, Spain’s national organization of professional art restorers. They explain that the amateur restorer added plaster to the statue, sanded it, and repainted it, effectively erasing the historic proportions of the piece.

While other viral restoration failures have served as a boon to commerce, as with the famously botched restoration of ‘Ecce Homo’ — which has quadrupled tourism to the Spanish town of Borja and has even inspired a light opera — The Guardian has Mayor Koldo Leoz stating quite firmly that they “don’t want to attract visitors because of the poor treatment of our heritage.” He went on to explain that they were not trying to publicize the poor restoration.

Agence France-Presse reports that while the failed restoration job was recognized as having been commenced in good faith, those responsible have inflicted irreparable damage to the historic statue. The parish where the statue is housed, St. Michael’s Church, and the restorer will be fined $6,840 each.