Jesus actually gave this saint His heart, after leaving her without hers for a few days 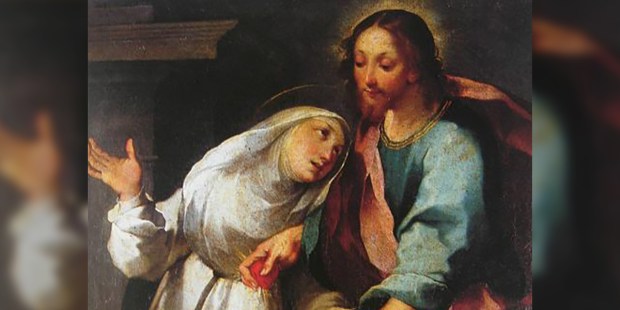 St. Catherine of Siena later had a scar on her side, where Jesus had withdrawn her heart.

While St. Margaret Mary Alacoque (the 17th century Visitation nun) did much to spread devotion to the Sacred Heart of Jesus in its modern form, a number of medieval saints nurtured devotion to the love of Christ and his Blessed Heart. St. Catherine of Siena (the fiery 14th-century Dominican mystic) was one—particularly notable—such saint.

In 1370, when Catherine was 23 years old, Jesus answered one of her most fervent prayers. Catherine had been asking that the Lord would take her heart, that is, her very will, and replace it with His own. One day, while she was praying, “Create a clean heart in me, O God, and renew in me a steadfast spirit” (Psalm 51), Jesus appeared to Catherine. Blessed Raymond of Capua, her confessor and first biographer reports,

It seemed to her that her Spouse presented himself to her, opened her left side, took out her heart and carried it with him, so that in reality she no longer perceived it in her breast. This vision was striking, and her attendant symptoms agreed with it so well, that when she spoke of it to her Confessor, she assured him that she really had no heart.

Blessed Raymond’s reaction, which he reports in her biography, was to laugh. He explained that no one could live without a heart. But Catherine insisted that Jesus had taken her heart away.

Suddenly she saw herself surrounded by a light from heaven, and amid this light, the Savior appeared to her, bearing in his sacred hands a heart of vermilion hue and radiating fire. Deeply affected with this presence and this splendor, she prostrated herself on the ground. Our Lord approached, opened anew her left side, and placed in it the heart which he bore.

Jesus gave to Catherine his own heart. So intimate was Catherine’s union with Christ that she shared his heart. A scar on her side, where Jesus had withdrawn her heart, was subsequently visible and attested to by Catherine’s closest companions.

From thence on, Catherine repeatedly speaks of being on fire with his love. She tells Raymond, “So intense is the fire that burns within me, that mere material flame seems a cold, dead thing by comparison, fit to freeze rather than to warm a person.”

Raymond says that Catherine was so close to Christ and she anticipated receiving holy Communion with such joy that people could hear her new heart beating.

For Catherine, the heart of Christ is ablaze. His fire is consuming and total. Christ’s supernatural strength and consolation is stronger than anything that can be felt on this side of eternity. The fire of love, given to Catherine through her sharing of Christ’s heart, prompted Catherine’s extraordinary service to her neighbor. Her love for others would be so conformed to the love of Christ that she notices in herself a desire to even die for her neighbor.

On another occasion, Catherine describes the love of Christ as that of a Mother. She told her confessor,

Father, do you know what our Lord did today in my soul? He acted as a tender mother towards her much-loved babe; she extends her arms from a little distance so as to excite a desire, and when her son has wept a few instants, she smiles, seizes him, clasps him closely to her heart, and then satisfies his craving thirst. Our blessed Lord did the same with me.

For Catherine, Christ’s love, which was a fiery and consuming thing, was also the only thing that would satisfy. Just as a mother has a unique power to comfort a child, Christ’s love alone could make Catherine content.

For Catherine, Christ’s love, which was a fiery and consuming thing, was also the only thing that would satisfy.

Finally, connected to Catherine’s devotion to the heart of Jesus is her devotion to His Precious Blood. Catherine’s Dialogue (a dictation of Catherine’s mystical conversations with God) is replete with references to Christ’s blood. For medievals in general, but particularly for Catherine, the blood of Christ points to God’s extraordinary mercy and compassion. His blood redeems our sins.

In the Dialogue, Jesus tells Catherine,

Being weak [people] fall into deadly sin and lose the grace they had drawn from the power of the blood in holy baptism. So my divine charity had to leave them an ongoing baptism of blood accessible by heartfelt contrition and a holy confession as soon as they can confess to my ministers who hold the key to the blood.

Catherine herself made frequent confessions, and deeply esteemed the ministry of her Dominican brothers as confessors. She wanted all those fallen from grace to be bathed in the forgiveness offered by the Lord’s blood, a truly boundless love.

Catherine’s dying words were, “the Blood! the Blood!” For Catherine, the heart of Jesus and His blood were the great symbols of God’s love. God became man. He took a heart like ours. He bled for us. This was the great motive of Catherine’s love: that God has loved us.

May our hearts be ever more conformed to His!