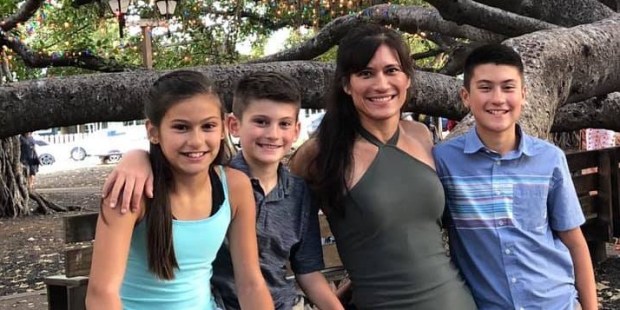 Through grit, determination, and family support this mother has become the first ever to complete the course.

If you’ve ever watched American Ninja Warrior, chances are you’ve questioned why anybody would want to put their body through the torture of getting over one of the obstacles, let alone the whole course. It’s grueling, demanding, and mightily impressive: it really is for the sporting warriors among us.

So when mom of three Sandy Zimmerman made history last Monday after completing the course — becoming the first mom ever to do so — she impressed millions for her athletic prowess and endurance, while showing us what moms can achieve through motivation and determination.

Zimmerman, 42, also proved the importance of never giving up. Not simply because she faced the nail-biting “Warped Wall” at the end of the obstacle, but because this was the third time she’d entered the competition — falling at the second obstacle in her first two efforts. As a mother, she has taught her three kids one of the fundamental lessons in life — never lose hope — and she demonstrated that. She also showed moms, women, and girls everywhere to believe in themselves.

Although Zimmerman relied on her incredible physical strength, her success is also due to the support she received from her three kids, and her husband Charlie, who went so far as to build a course with 40 obstacles in their own backyard.

In fact, two of Zimmerman’s kids, Brett, 10, and Lindsey, 13, also like to challenge themselves, having competed in American Ninja Warrior Junior. So perhaps it’s a question of a family that trains together, gains together. As Zimmerman explained to The Spokesman Review, as she hit that buzzer at the end of the course, her first thought was “We did it!” and not “I did it.”

But the former foster child, one-time national judo champion and basketball player for Gonzaga University, and current physical education teacher at Michael Anderson Elementary at Fairchild Air Force Base won’t be hanging up her sneakers for the summer. Ready to challenge herself further, we’ll see her on screens August 12 as she qualified for the Seattle-Tacoma city finals round of American Ninja Warrior.

Read more:
4 Things women can learn from the winner of the NYC Marathon