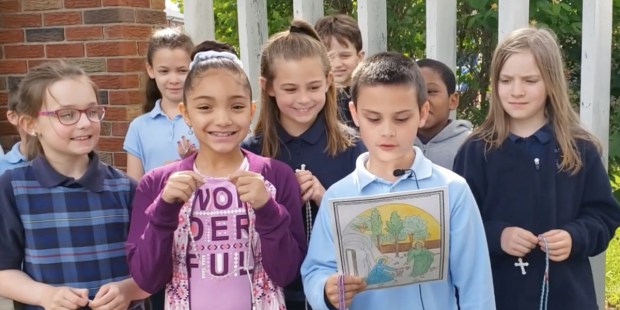 Rochester schools are expecting the program to return next year.

The Diocese of Rochester, New York, launched a new program in the 2018-19 school year to bring unity among its 18 elementary and middle schools and promote devotion to the Blessed Mother.

On Wednesday afternoons from February to June, the schools throughout the diocese connected online via a live feed on the diocese’s YouTube Channel and prayed the Rosary together, with a different school leading each week. All 18 had led by the last week of school.

The program was the brainchild of Jim Tauzel, diocesan coordinator of curriculum and instruction, who came up with the idea as the diocese celebrated Catholic Schools Week in January.

Tauzel explained, “We were looking for ways we could unite our schools, promote prayer, and pray for the intentions of our diocese.”

As the Diocese of Rochester is geographically large, with schools scattered from the Pennsylvania border to Lake Ontario, he said, an online rather than physical gathering of the diocese’s 3,000 school children seemed the most workable solution.  With the support of the schools’ leadership, the program kicked off on February 6, and concluded with the school year on June 19.

The first week, staff had to get used to the online access technology, but after that, the program went “super smooth,” Tauzel reported.

“I think each of our students who participated got something out of the Rosary,” he said. “Seeing their fellow students praying throughout the diocese let them see that the prayers were bigger than themselves, and helped them realize that Mary is waiting there with buckets of grace to give to those who ask.”

The type of participation varied by grade level. Middle school students offered reflections on the mysteries, while Grades 3 to 5 would see the students joining in and asking what the mysteries meant. A pre-K class was even invited to lead a decade.

“It was delightful,” Tauzel said. “It was such a perfect prayer.”

Among the schools participating was St. Mary Our Mother School in Horseheads. The diocesan schools’ principals began praying the Rosary before their monthly meetings the previous school year, said Principal Jean Yorio, because “as a [schools] department, we have tried to bring ourselves into a higher level of devotion through the Rosary.”

The practice was extended the following year to include the school children. At St. Mary Our Mother, the Rosary recitation was combined with the efforts of the parish’s Prayers & Squares Quilting Group, which makes quilts for the sick. The quilt tops are made by parish volunteers, and sent to the schools, where students tie the quilt tops to a bottom fabric panel. They are returned to the parish volunteers, who bind the quilts.

The pastor, Fr. Christoper Linsler, blesses the quilts and they are distributed to the needy. As part of the process this spring, however, students and volunteers prayed the Rosary over the quilts as another step in the process.

At St. Mary’s School in Canandaigua, Principal Ann Marie Deutsch was excited to participate. She said, “It was a powerful witness for our schools to demonstrate the Catholic identity of who we are [and] for our students to be able to see students like themselves in our other Catholic schools and be able to pray with them.”

She believes the program went well, and expects it to return for the next school year: “Each school took the idea to a different level and demonstrated individuality while bringing unity of purpose … Every school was impressed with the outcome and the students enjoyed participating.”

She added, “Learning why and how to pray is a very important skill that all people should have. Saying the Rosary is just one way Catholic school students learn to pray. This skill will serve them in their lives forever.”

Read more:
What a tortured prisoner of war taught me about the Rosary

Mary Martell of Holy Cross School in Charlotte noted that her school already engaged in a variety of Marian devotions, including praying the Rosary in individual classrooms or as a school, and having May Crowning activities.

She explained, “We teach the children that Mary is our mother, our protector and our intercessor.  She is there to celebrate with us and help us in our time of need.”

The online Rosary was another effective way to reinforce Marian devotion. The school is located on the Genesee River and Lake Ontario, and when Holy Cross students had the chance to lead they showed off the “beautiful places” in their school and community, including the parish’s Marian grotto and church, and the Charlotte Lighthouse. Portions of the students saying the Rosary at these sites was prerecorded and used as part of their broadcast.

Martell was pleased that students and staff had the opportunity to deepen their devotion to Mary. She concluded, “We were excited for our turn and could not wait to show what makes our school unique and special while sharing our Faith with others.”

Read more:
10 Ways to not hate the Rosary