Declassified images from U-2 spy planes helping with biblical archaeology 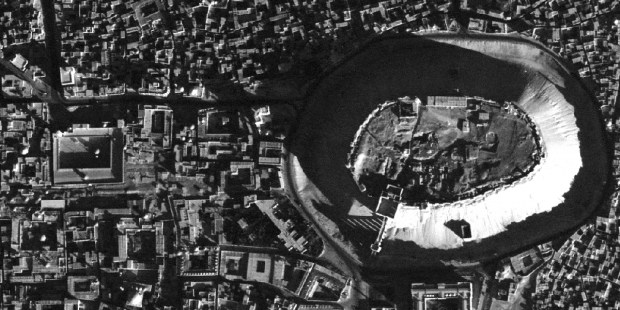 We normally think of archaeology as being conducted with shovels and brushes, with teams carefully uncovering the secrets long hidden beneath the surface of the earth. But photos taken from the air are useful to archaeologists as well—used for identifying patterns and features that are not so easy to notice at ground level.

What may be even more surprising is how instruments of war have contributed to our understanding of the history of biblical lands.

Cold War-era U-2 spy planes photographed areas of the Middle East, and the declassification of those top-secret images are shedding new light on ancient history, according to a recently published scholarly paper.

The U-2 was the premier spy aircraft in the 1950s and ’60s that helped the United States keep an eye on the Soviet Union and China, particularly in regards to their nuclear weapons. Flying at heights upwards of 70,000 feet, the sleek jet was equipped with an ultra-precise camera. It was instrumental in bringing about a peaceful resolution of the Cuban Missile Crisis, giving the U.S. the evidence it needed to show that the U.S.S.R. was smuggling nuclear weapons into Cuba. It also monitored situations in the Middle East, including the 1956 Suez Crisis and the 1958 Lebanon Crisis.

The program suffered a blow when a U-2 pilot, Francis Gary Powers, was shot down over Russia. Powers was tried and convicted but ultimately released, an incident dramatized in the 2015 Spielberg film Bridge of Spies. Eventually, the program was replaced by the CORONA spy satellite program.

In a paper published in Advances in Archaeological Practice, Emily Hammer and Jason Ur use images taken from U-2 missions to identify archaeological sites in the Middle East that have been damaged or covered up over the past 60 years, according to a report in Forbes.

“The identification of ancient sites, fortifications, road networks, and irrigation networks in modern satellite imagery is limited by the degree to which these features have survived the destructive effects of development and intensive agriculture in the last several decades,” the authors write in the paper. “Historic imagery sources provide archaeologists with a window into the past, before these processes took hold in many rural parts of Asia. Bronze Age tracks, Iron Age canals, and medieval city walls that have since disappeared from modern view appear strikingly clearly in the most high-resolution of the CORONA images from the KH4B satellite, captured 1967–1972.”

Imagery from the U-2 flights is even older—and clearer.

Hammer and Ur take a look at three case studies, including prehistoric hunting systems in eastern Jordan, irrigation systems of the first millennium BC Neo-Assyrian Empire in northern Iraq, and 20th-century marsh communities in southern Iraq. “Scouring the data preserved in these declassified images, Hammer and Ur documented numerous archaeological sites and features that have helped researchers to come to a more complete understanding of the ancient landscape,” Forbes reported.

The city of Nimrud, which is mentioned in Genesis, is located along the Tigris River. Because the town sat on a terrace above the floodplain, canals were needed in order to supply the city with water for consumption and for irrigation of royal parks and gardens. In one photo, Hammer and Ur identified the remains of two canals, one of which appears to have been built by the Assyrian Empire more than 3,000 years ago. In the intervening decades since the U-2 image was taken, the modern Iraqi town of Khabat has spread to cover the canal, making it virtually invisible in modern aerial images. Examinations of the imagery allowed the authors to create “the first systematic description of how water reached the ancient city,” and even document the presence of a subterranean component of the canal system.

“An aerial perspective has been central to the study of the Neo-Assyrian Empire’s irrigation systems because the remains of their large canals are frequently invisible on the ground, and many of them remain difficult or impossible to access due to the ongoing geopolitical situation in the Republic of Iraq,” the authors say.

Though this treasure trove of photos includes many sites associated with biblical history and archaeology, it does not include Israel. Flights over Israel “have been systematically excluded from the declassification process,” Hammer and Ur write. “This is likely due to the 1996 Kyl-Bingaman Amendment to the 1997 Defense Authorization Act, which restricts the resolution of imagery of Israel and Palestine that may be distributed by US-based companies.”