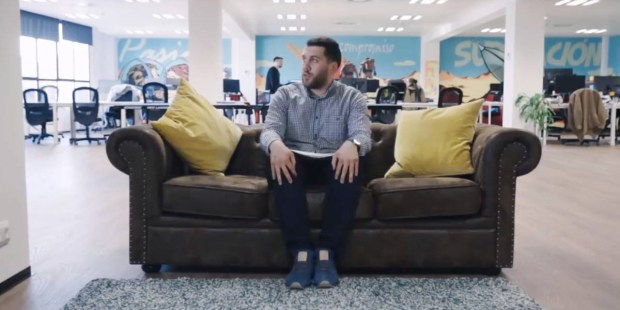 Jordi Pascual didn’t expect his video to make such a big impact.

Jordi Pascual is 26 years-old, and he’s making an impact on people’s lives through YouTube. He’s not making a splash through entertainment, though, like many who attain fame streaming video games, performing a cappella harmony with recorded versions of themselves, or making killer compilations of cute cat videos; instead, he’s raising awareness about the difficult situation faced by his 59-year-old father, who spent nine years unemployed, despite his excellent qualifications, because of age discrimination. Thanks to the video, his father has a job today.

Jordi didn’t think it was right that his father, who lost his job at the age of 50, couldn’t find another job simply because of his age. After watching him search for almost a decade, Jordi came up with the idea of a short video (in his native Spanish) called “Hire my father. This is the reality of the job market in Spain.” (“Contrata a mi padre. Esta es la realidad del empleo en España.”).

However, he didn’t just want to help his father; he also wanted to create public debate about the situation in his country (Spain) and in many other countries: it’s difficult to find a job if you’re over 40 years old. So, he published the video and launched a website, contrataamipadre.com , where visitors can see a timeline of his father’s professional and personal life and can download his résumé.

A résumé full of talent

Jordi’s father (also named Jordi) has three college degrees and has been an auditor, a financial director, a company’s controller, and a team supervisor in a multinational company … but the job market rejected him for nearly 10 years.

Jordi’s video casts himself in his father’s role. We see him searching for a job online, and going to a job interview, where his qualifications are read off and the recruiter asks, “How is it possible that with the knowledge and experience you have, you’re looking for a job, when companies should be looking for you instead?” At that moment, Jordi is replaced in the video by his father, who replies, “Because I’m 59 years old.” The video ends with the address of the website Jordi created, and the hashtag #contrataamipadre

The video was a surprising success, racking up more than 100,000 views in less than three months and having a real impact. Jordi started to receive messages of support, proposals for meetings, and eventually a total of 30 job offers that boiled down to 15 solid offers. Jordi’s father now has a job: he’s the CFO of a small company. Jordi’s idea worked!

Now that his father’s problem is solved, Jordi has decided to set up a platform to help people like his father who are discriminated against in the job marked because of their age. “As a son, I know what we’ve suffered at home, and the anxiety created by not finding a job,” he says. If Jordi has any say in it, fewer people will have to go through the same experience in the future.

Read more:
People, not money, have to be at center of economy, pope says in interview with Italian finance paper

Read more:
Tips for surviving unemployment when it hits your family