Americans produce the most global waste per capita, study shows 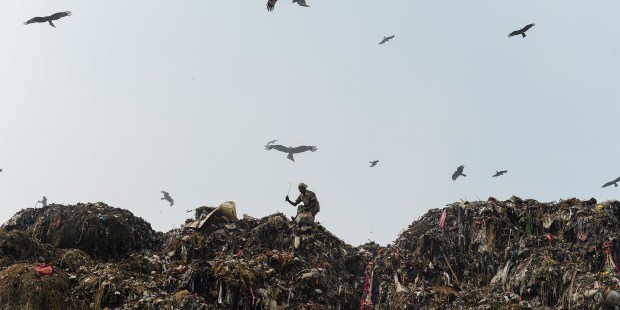 AFP PHOTO / SAJJAD HUSSAIN
A man sifts through trash at a massive garbage site in New Delhi on September 27, 2016.
Polluted air is a "public health emergency", the World Health Organization said September 27, adding nine out of 10 people globally breathe bad air that is blamed for more than six million deaths a year. And the WHO warned that nearly 90-percent of air pollution-related deaths occur in low and middle-income countries.

The U.S. also only recycles 35% of its garbage.

The United States is surpassing every other country when it comes to the amount of solid waste it produces. Each American produces over 1,700 pounds of garbage a year — that’s about 12% of the two billion tons of total solid waste produced in the world.

All of that plastic, food and other garbage piling up is not being recycled either. Americans only reuse 35% of the solid waste they produce.

This poor report card comes from Verisk Maplecroft, a research firm that specializes in global risk, which has developed two new indices — on waste generations and recycling — according to a BBC report.

The United States was singled out for its inability, relative to other developed nations, to recycle its waste.

“Where the US is doing badly is the relationship between what it generates and its capacity to recycle,” said Niall Smith, one of the authors of the report.

“And relative to its high income peers, that’s where it is performing poorly.”

The banning of waste imports to China, Thailand, Vietnam an Malaysia, leave countries like the United States and Canada with nowhere to put their garbage and recyclables.

“A lot of US waste – now that it can’t get shipped to China – is just getting burnt, there just isn’t the investment in place in infrastructure to deal with this problem,”  Will Nichols, head of environmental research at Verisk Mapelcroft told the BBC.