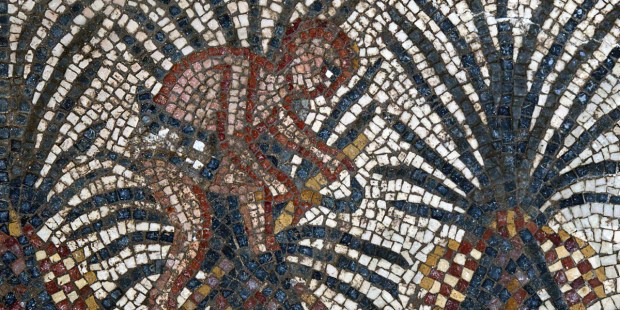 Biblical realities continue to unfold in the Holy Land.

A team of archeologists and students, led by Carolina professor Jodi Magness, has spent the last nine years excavating the ancient village of Huqoq, in Israel’s Lower Galilee. Each year, the group’s discoveries build upon what little we know of the Jewish communities of the 5th century, and this year they have unearthed rare examples of ancient Jewish mosaics.

There were two major discoveries this excavation season, which Magness talked about in an interview with UNC News. The first is a depiction of the four beasts described in Daniel 7:

“The first beast: a lion with eagle’s wings. The lion itself is not preserved, nor is the third beast.  However, the second beast from Daniel 7:4 – a bear with three ribs protruding from its mouth – is preserved. So is most of the fourth beast, which is described in Daniel 7:7 as having iron teeth.”

The second major discovery in Huqoq this year was the first depiction of the episode of Elim ever to be found in ancient Jewish art. Elim is the site where the Jewish people made camp after fleeing from Egypt, found in Exodus 15:27. Magness also described the scene from the Elim mosaic:

“The mosaic is divided into three horizontal strips, or registers. We see clusters of dates being harvested by male agricultural workers wearing loincloths, who are sliding the dates down ropes held by other men. The middle register shows a row of wells alternating with date palms. On the left side of the panel, a man in a short tunic is carrying a water jar and entering the arched gate of a city flanked by crenellated towers. An inscription above the gate reads, ‘And they came to Elim.’”

Magness explained that the first mosaic is interesting because it is a reference to the end times, but the second mosaic is a bit of a mystery to her crew, as Elim was only briefly mentioned in the Bible, and does not carry the same significance as other biblical narratives.

Professor Magness believes these are important discoveries because they come from an era where little was recorded of the Jewish people, besides what was written by Jewish sages and what few references were made to them in early Christian writings. She said:

“So, archaeology fills this gap by shedding light on aspects of Judaism between the fourth to sixth centuries CE – about which we would know nothing otherwise. Our discoveries indicate Judaism continued to be diverse and dynamic long after the destruction of the second Jerusalem temple in 70 CE.”

Magness said that although her team has been working at the site for nine years, they intend to return to Huqoq until they are sure that they have excavated all of its hidden historical treasures. She said that the mosaics have been removed for preservation, and once she is satisfied that there are no more discoveries to be made, she will turn the site over to Israeli Antiquities Authority, so they might develop it and open it to the public.

“In the meantime,” Magness said, “I expect our work will continue to shed light on the past through new discoveries.”