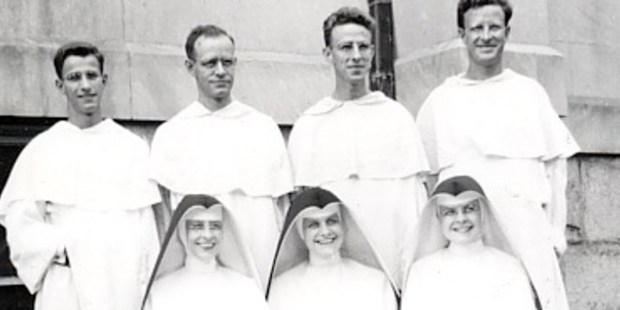 These siblings all felt the same calling and to the same community!

One of the incredible things about being part of a large family is the overall sense of unity between the siblings that so often occurs. Of course, there are always the squabbles, but there’s so much love — and influence — shared from the oldest to the youngest. This seems to be the case with the Hinnebusch family. When William (1908-1981), the eldest of 10, set off to join the Dominicans, six of his other siblings soon followed his example.

After studying for a doctorate in history at Oxford University, and spending time in Rome painstakingly researching the Dominican order, Fr. William became a Dominican historian, writing among many other works The Dominicans: A short history. His youngest sibling, the late Fr. Fred, explained that at Fr. William’s death a book was left unfinished. The historian had “labored down to the very end” to provide a thorough history of the order, according to his sibling who was 15 years younger. Perhaps out of a sense of sibling duty or a respect for his brother’s hard work, Fr. Fred and a fellow Dominican took it upon themselves to see that this final work was not only completed but brought up to date to create a “critical accurate account” of the Dominican order.

Partly thanks to his work in helping his big brother, Fr. Fred was able to present many lectures on the Dominican history. After an impressive academic career he also served on the Pontifical Faculty of the Immaculate Conception as well as the Leonine Commission — a group of scholars who have the important task of critically editing the works of St. Thomas Aquinas. As the youngest Hinnebusch child, he died only last year at the age of 95, the last of the surviving friars who nonetheless had an integral role in shining a light on the Dominican Order that dates back more than 800 years.

The two other brothers who joined the Dominican Order were Paul and Albert. When Paul (1917-2002) was in high school he decided to join the same order as his brother William, who was about nine years his senior. When he finally announced the news to his family his mother said: “You didn’t have to tell me. I always knew you were going to do that; all through the years I knew,” as reported in his obituary. Fr. Paul went on to become a preacher and a spiritual writer.

Fr. Albert Hinnebusch, who was born in 1911, was the only friar brother not to make it to old age. Dying at the age of 46, Fr. Albert played an active part in the Holy Name Society in the South.

With four brothers joining the Dominicans it comes as no surprise that three of the Hinnebusch sisters also joined the Dominican Order: Sr. Claire, an educator; Sr. Regina Ann; and Sr. Dorothy, were all members of the St. Mary of the Springs congregation in Ohio, according to Opeast. The three remaining siblings, Raymond, Joseph, and Mary, were all married.

When Fr. Fred died last December it marked the end of the Hinnebusch siblings in this life, yet their dedication to the Dominican Order means that their life’s works will live on for generations to come.

If you’d like to learn more about the works of Fr. William Hinnebusch, we’d recommend watching this introductory video made by his younger brother Fr. Fred.

Read more:
26-year-old twins ordained to the priesthood side by side on the same day

Read more:
Your chance to see inside the walls of a Dominican cloister