What is a grotto and why are so many Catholic shrines built in them? 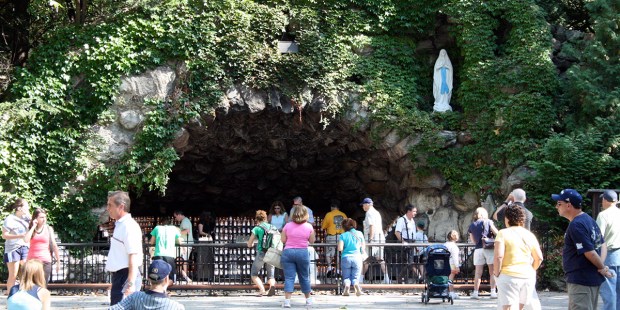 Grottoes have a long history, but saw a significant rise in use as shrines during the 19th century.

The word “grotto” has become used almost exclusively to refer to Catholic shrines built into a rock formation. Often these rock formations are man-made, but they can also be found in natural caves throughout the world.

Grottoes originated in both Greek and Roman culture and were associated with various gods. These grottoes would normally be the location of a natural spring and were believed to have a unique connection to the divine.

With the Christianization of the Roman Empire, most pagan temples that were built in grottoes were converted into Christian churches. This continued the association of the divine with unique caves and rock formations.

Biblically speaking, the prophet Elijah discovered the presence of God while in a cave.

After the earthquake a fire, but the Lord was not in the fire; and after the fire a still small voice. And when Elijah heard it, he wrapped his face in his mantle and went out and stood at the entrance of the cave. And behold, there came a voice to him, and said, “What are you doing here, Elijah?” (1 Kings 19:12-13)

Then in 1858, St. Bernadette saw a vision of the Virgin Mary in a cave. A spring of water appeared and countless miracles have occurred through immersion in it. Pilgrims eventually built a large church near the grotto and it quickly attracted thousands of people from around the world. The reputation of the Lourdes Grotto spread like wildfire and imitation grottoes were quickly built.

In the United States grotto shrines can be seen at such places as Notre Dame, Indiana, West Bend, Iowa, and Emmitsburg, Maryland. The unique spiritual environment found at Lourdes is replicated in these different places in hopes of kindling the flames of faith in a similar way.

For some reason God has imprinted within us a desire for the divine that is awakened in cave-like structures. There appears to be no adequate explanation as to why this is the case, but one thing is certain, grottoes have always spoken to our souls and continue to lead us to give glory to God.

Read more:
5 Miraculous springs that have a history of healing

Read more:
What’s the secret ingredient in the Lourdes water?