Archbishop Sheen to be beatified 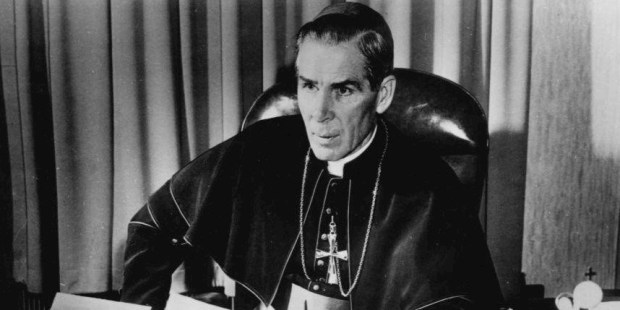 Just a week after his body was moved from New York to Peoria, Illinois, the Vatican announced that Archbishop Fulton J. Sheen will be beatified, a significant step on his way to officially being declared a saint.

On Friday, during a meeting with Cardinal Angelo Becciu, Prefect of the Vatican Congregation for the Causes of Saints, Pope Francis authorized a decree recognizing a miracle through Sheen’s intercession.

The miracle involves the unexplained recovery of James Fulton Engstrom, a boy born apparently stillborn in September 2010 to Bonnie and Travis Engstrom of the Peoria-area town of Goodfield, Catholic News Agency reported. “He showed no signs of life as medical professionals tried to revive him,” the agency explained. “The child’s mother and father prayed to Archbishop Sheen to heal their son.”

A seven-member panel of medical experts advising the Vatican Congregation for the Causes of Saints gave unanimous approval of the miracle attributed to the famous television personality and evangelist in March 2014, CNA said.

A gifted teacher and speaker, Sheen’s homilies were much appreciated.  In 1930, he began participating in the Sunday radio program titled “The Catholic Hour,” which reached an estimated 4 million listeners at the height of its popularity. In 1951, he began hosting a weekly television series, “Life is Worth Living,” on matters of faith that attracted some 30 million viewers.

He died in New York at the age of 84, on 9 December 1979. He was buried in St. Patrick’s Cathedral, where months earlier he had met visiting Pope John Paul II.

The Diocese of Peoria opened the cause for Sheen’s canonization in 2002, after Archdiocese of New York said it would not do so, CNA explained. In 2012, Benedict XVI recognized the heroic virtues of the archbishop. But in September 2014, Bishop Daniel Jenky of Peoria suspended the cause on the grounds that the Holy See expected Sheen’s remains to be in the Peoria diocese.

Sheen’s niece, Joan Cunningham, filed a legal complaint in 2016 seeking to have her uncle’s remains moved to the Cathedral of St. Mary in Peoria. The Archdiocese of New York repeatedly appealed the attempt to transfer Sheen’s remains to Peoria.

Finally, on June 27, Sheen’s remains were transferred to Peoria, and the cause for beatification was resumed.

No date has been given for Sheen’s beatification. Another recognized miracle attributed to Sheen would lead to his canonization as a saint.

The Diocese of Peoria, in a statement, said it received the news with “overwhelming joy.”