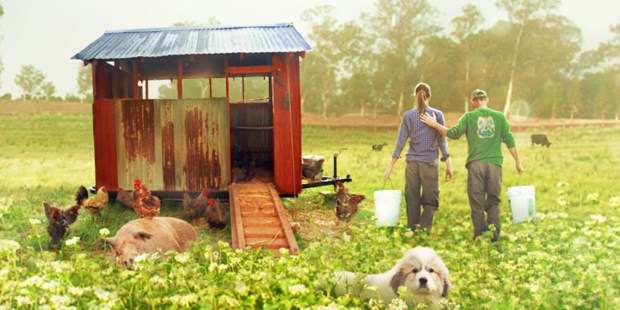 Molly and John Chester pursued a dream, and it resurrected a parcel of dead earth.

If The Biggest Little Farm were to be nominated for an Oscar, one would hope that the worms are recognized for best supporting actors. In fact, without them, this documentary might not have been made.

When Molly and John Chester decided to try their hand at farming, they decided to do so in such a way that they wouldn’t use chemical fertilizers or pesticides.

In a twist on the hapless buyer of “prime Florida real estate” who finds that he has purchased swampland, the Chesters are stuck with ground that is exhausted from over-farming and baked hard by California’s recent years of drought. They and a consultant can barely get a pitchfork into the 200-acre parcel about an hour north of Los Angeles.

But that consultant, Alan York, a man they found online, guides them through a process that will turn their little desert into something like Eden.

And that’s where the worms come in. Chester, a cameraman who had already made a name for himself working on nature documentaries, learns a new appreciation for the lowly creature. Molly, who as a personal chef may have once thought of worms as being occasional stowaways in certain items of produce, learns that they are vital partners in producing the elements of fine meals.

York has the couple—who are assisted by a couple of local Mexicans who worked for previous owners of this farm, and a small division of interns—set up a sizable composting operation where worms can flourish and produce lots and lots of feces. That’s the magic ingredient that will help proliferate billions of microbes to be mixed into the irrigation system, giving the ground new life. It turns the situation around for the parched earth.

In time, as the crew clears away overgrowth, plants a terraced orchard of stone fruit trees—75 varieties of them—and lays down a carpet of ground cover, the desert is reclaimed. The farm also has a variety of animals, whose droppings add to the secret sauce. Polinating bees return. Optimism seems to be blooming all over the place.

But this is no utopia, and anyway, the film would get rather boring if there weren’t any challenges. No worries. We’ve got plenty of challenges—from a sick sow who can barely feed her young to the persistence of the coyotes who devastate the poultry and threaten the farm’s egg sales.

But the drama coming from the man versus nature and nature versus nature scenarios ultimately find their denouement in a new way of thinking: man working with nature and allowing nature to work with herself. As the farm’s website puts it, “Our team has been charged with the mission of creating a well-balanced ecosystem and rich soils that produce nutrient-dense foods while treating the environment and the animals with respect.”

Obviously, something like that takes a lot of work, and it’s amazing that a full-time farmer like Chester could produce the stunning cinematography he did, documenting the farm’s progress over eight years. York stays on as consultant but midway through succumbs to an aggressive cancer. The Chesters have to make decisions on their own, but one piece of advice York left them echoes through all their deliberations: diversity. It’s why they have 75 varieties of fruit and some 200 different crops.

Ultimately, they learn that everything in nature has a purpose, even those things that seem to be destructive and interfere with man’s plans. Invasive snails who are munching voraciously on plants are found to be great appetizers for the ducks on the farm, for example. Snakes have a hankering for the gophers who tear up the ground. But the gophers are good for aerating that ground too.

Even the coyotes, who have terrorized the farm animals night after night, have a place. In a moment of exasperation, Chester rushes into his bedroom, unlocks a cabinet and loads a shotgun. That coyote might have met a violent end, but later, another one teaches Chester a lesson. He finds the animal lying next to a fence, with his legs twitching and his eyes looking up helplessly at Chester. The animal apparently had been chasing a rodent the night before and ran into a piece of equipment, breaking his neck and ending up paralyzed. The Chesters decide that the coyotes should be left to be themselves, because they prey on animals that are a nuisance for the farm.

Aside from the worms, though, one of the stars of the show is a sow named Emma (the Chesters got her as Ugly Betty but rechristened her). After delivering a litter of 17 piglets, she develops a fever, and her udders dry up. With the help of a farm vet, the Chesters mix up all kinds of natural solutions to try to help her, but at one point her situation seems helpless. Eventually, she turns a corner, however, and goes on to one day have another litter.

In a short documentary about Emma, which one wishes Chester had found a way to integrate into The Biggest Little Farm, the filmmaker speculates that it was in fact her own piglets that gave Emma the will and strength to keep on living.

“It’s so obvious that she was saved by her calling,” John ruminates. “In her case, it was to be a mom. And when her calling suddenly took back burner, her spirit began to fade … Some might say that the very thing that could threaten to take us down can at times be the one thing that keeps us alive.”

John hints that the experience encouraged him and Molly to be open to new life themselves, and in the feature-length film, we see a midwife delivering a baby boy, at home on the farm.

The Chesters call their operation Apricot Lane Farm. They might have considered calling it Noah’s. In the wake of a grinding drought, a torrential rain dumps some 18 inches on the area. The topsoils of nearby farms are “washed into the ocean,” Chester narrates. But not Apricot Lane’s, whose biodiversity and ground cover protect it from the elements. The farm emerges as a type of Ark, surviving the deluge and bringing forward the best of civilization—that which has acted in accordance with the laws of nature.

Which raises a poignant question in an age when it seems everyone from Pope Francis to the United Nations to local governments and activists are sounding the alarm that a new type of flood is coming, the effects of climate change, which will sweep us all away. Some commentators warn that the phenomenon has made hurricanes, droughts, wildfires and other disasters much more intense. In a particularly frightening scene, the farm is almost engulfed in one of the great California wildfires we’ve seen in recent years. Fortunately, the Apricot Lane was not in its path.

Chester ponders all these things, and at the end of a long day he stares up at the stars. For a location so close to LA, the skies are incredibly populated. But no matter. The images of the billion-pointed Milky Way set the scene for us as we listen to John’s meditation, reminding us that we are spinning around in that galaxy—in relation to which we are as tiny as one of the microbes that rejuvenates the soil beneath our feet.