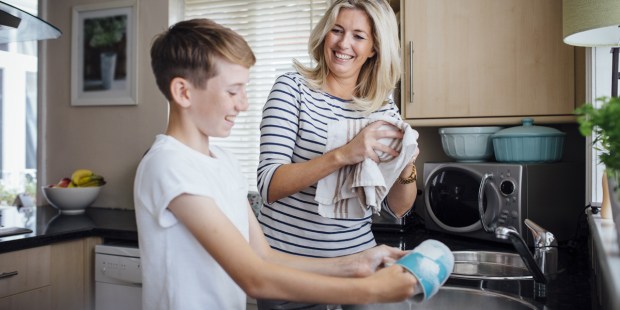 Kids don’t just need to be taught virtue — they need opportunities to practice it.

As a personal trainer, I lead bootcamp style group workouts. I recently took over a class from another trainer who moved to California, and yesterday was my first day teaching.

This particular class is in a fantastic location, close to major crossroads, with plenty of space and lots of shade. And the time — noon — is uniquely appealing for people who like to work out on their lunch breaks or who work from home. It’s going to be a great addition to my schedule during the school year, but … this is summer time and yesterday, last-minute schedule changes meant that I had to bring my 10-, 8-, and 6-year-olds with me to class.

Although I encourage clients to bring children with them and always provide sidewalk chalk for their kids to play with, bringing my own children seemed like a breach of professionalism. Nevertheless, I had no choice. So I packed up their lunches, made sure they had fully charged electronics, and headed to class.

When I got there, I instructed the kids to stay buckled in while I drove around the parking lot to set up my equipment. But my son Liam asked if he could help put the cones out. I hesitated, unsure of whether he’d be able to put them in a straight, evenly spaced line. But I was short on time, so I agreed. Then my daughter Charlotte asked if she could lay out the agility boxes, and I hesitated a little longer — after all, the agility boxes have to be spaced perfectly and laid out just so in order to keep the flow of traffic as smooth as possible. But she looked so eager that I acquiesced, showed them both where I wanted everything, and then I drove my 6-year-old over to the pavilion to set up my table.

My 6-year-old, eager to help like his siblings, began to take items out of a bucket to carry them to the table. “No, buddy, those stay in the bucket and the whole thing goes under the table,” I said hastily. His face fell.

“But Mom, isn’t there anything I can help with?” he pleaded, his big blue eyes wide. I hesitated again, unsure of whether or not I should let him carry the lighter dumbbells. But I told him he could try — and much to my surprise, he was able to carry over half of the dumbbells to the table with ease.

I quickly unloaded and set everything else up before returning to the parking lot to check on the cones and agility boxes. To my surprise, my kids had set them up exactly as I instructed, and everything was perfectly aligned. To be honest, they did a better job than I would have — which I told them. They were practically bursting with pride as they eagerly asked if there was anything else they could do.

“Not right now … I’m just not sure if there are enough travel stations. It depends on how many people show up. Let me think for a second about how I could rearrange this in case I have more people,” I said, staring pensively at the parking lot.

After a few seconds Charlotte quietly said, “Mom, you could move the cones to the middle instead of the side, and then put the other boxes where the cones are. That would give you enough space for twice as many people.”

I stared at the parking lot and then at Charlotte, a little stunned. She was right. It was such a simple solution — not only did it double the number of stations, it also made the travel space between the cones and boxes more appropriate for agility work. And it was a solution I would never have thought of.

“You’re right, Charlotte!” I said. “That’s perfect! I’ll just go …” but before I could even finish the sentence my three kids had sprinted out the parking lot and were busily rearranging the set-up exactly as Charlotte had envisioned it.

Last night, I couldn’t stop thinking about the unexpected helpfulness, creativity, and problem-solving skills my kids had displayed. I hadn’t known they were capable of any of it — and if I hadn’t let them help, I still wouldn’t.

As parents, we spend a lot of time trying to teach our kids both skills and virtue. But as busy and distracted as we often are, we tend to judge our success (or lack thereof) on the times when they fail. Doing it the other way around — giving them opportunities to use those skills and display those virtues — isn’t something most of us even think about.

But we should. No matter how much of a rush we’re in, we should never turn down a child’s offer to help. It doesn’t matter that they’ll take twice as long and might not do it perfectly — the task isn’t the most important thing anyway. The important thing, as always, is what we’re teaching them. If we tell our kids how important virtue is, but refuse all opportunities to let them practice it, we’re undermining our own words. More importantly, we’re undermining our children’s formation.

So let your kids help with anything and everything. Give them the opportunity to live the way you’re telling them to, and you might be surprised at how capable they actually are.

Read more:
3 Easy ways to get your kids involved in saving electricity

Read more:
10 Summertime manners to teach your kids so everyone can relax