The secret to a successful day, according to Fulton Sheen 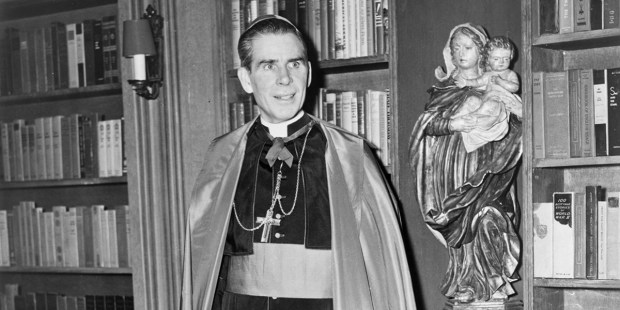 He never missed doing this one thing, and believed it fueled his priesthood.

Archbishop Fulton Sheen was well-known during his life for his practical spiritual advice, giving the ordinary lay person tools for spiritual success.

One of the main pieces of advice that he stressed in his various writings and autobiography was a daily practice that gave him the energy he needed to have a successful day.

When he was ordained a priest he resolved to spend an hour of prayer each day before the Blessed Sacrament. Sheen explains in his autobiography, A Treasure in Clay, that the idea came to him while in seminary, and he kept the resolution for the rest of his lifetime.

He then relates how it wasn’t easy and that often many sacrifices were required to make it happen.

The Holy Hour. Is it difficult? Sometimes it seemed to be hard; it might mean having to forgo a social engagement, or rise an hour earlier, but on the whole it has never been a burden, only a joy.

Not every hour of prayer was easy for Sheen, who explained how on occasion he found himself dozing off during the time of prayer. However, he believed that a consistent commitment to an hour of prayer allowed him time to develop a deep personal relationship with Jesus.

For Sheen, the hour of prayer was an opportunity to listen attentively to God and to quiet the mind from all the various cares and troubles of the world. The time allowed him the ability to prepare himself for the coming day and approach it with a renewed vigor.

He also believed it helped preserve his vocation, keeping him from pursuing “greener pastures.”

So the Holy Hour, quite apart from all its positive spiritual benefits, kept my feet from wandering too far. Being tethered to a tabernacle, one’s rope for finding other pastures is not so long. That dim tabernacle lamp, however pale and faint, had some mysterious luminosity to darken the brightness of “bright lights.” The Holy Hour became like an oxygen tank to revive the breath of the Holy Spirit in the midst of the foul and fetid atmosphere of the world. Even when it seemed so unprofitable and lacking in spiritual intimacy, I still had the sensation of being at least like a dog at the master’s door, ready in case he called me.

While most of Sheen’s holy hours were performed in a church before the Blessed Sacrament, Protestant pastors found inspiration in Sheen’s words and adapted the practice in their own way.

Most remarkable of all was the effect the preaching of the Holy Hour had on non-Catholic ministers. I preached three retreats to Protestant ministers — on two occasions to over three hundred in South Carolina and Florida, and on another occasion to a smaller group at Princeton University. I asked them to make a continuous Holy Hour of prayer in order to combat the forces of evil in the world, because that is what our Lord asked for the night of His Agony.

Even though they didn’t pray an hour before the tabernacle of a Catholic Church, they adapted the practice and spent a hour each day listening to God and interceding for the world.

Many lay people have since tried to imitate Sheen’s advice and have seen the abundance of spiritual fruits. Some are able to remain in prayer for a full hour, while others are faithful with a half-hour or even 15 minutes.

The main point is to dedicate a substantial amount of time to prayer each day and to stick with it. The more time we are able to spend in silent prayer, the more time we can develop our relationship with Jesus.

Even though it may not seem like anything “happens,” the fruits will clearly be evident later on, and your days will be much more “successful” in ways you never imagined.